Toby has been on the ‘Blended Diet’ for over a year now and I thought it’s probably worth sharing our experience and journey with the hope that other people find some of the information useful.

What is the Blended Diet?

Most children and adults who don’t eat have some form of gastrostomy, a tube straight into their stomach in order to get sustenance into the body. The current guidelines in the UK suggest that people with a gastrostomy should be given a formula milk via a pump to provide all the vitamins, nutrients and calories applicable for their age.

The Blended Diet (BD) is a parent led movement that is gathering support from doctors and dietitians in the UK which advocates moving away from the formula milk to giving real food, blended to smooth consistency in a blender. Most foods can be blended and there are a number of reasons why people are now doing this.

These two videos really nailed if for me:

How you feel when ‘sugar spiking’ on Paediasure. Click here

What we feed Toby - sample menu and weights (3.5yr old)

Toby and the Blended Diet

Everyone has different reasons for trying the BD, some are about weight gain, others health benefits, some down to food intolerances such as dairy.

For us it was a slow realisation with gentle prodding from a couple of our respite nurses.

As a small baby he was fully weaned and had a huge appetite and willingness to try anything, sadly with the introduction of one of his epilepsy drugs he became picky then reverted to a baby bottle and then total oral aversion, all over six months. After nearly three months of hell with an NG tube (a thin tube up his nose and down into his tummy, which he pulled out regularly) he had a PEG fitted. The PEG is a tube into the stomach with a big bung on the inside and a tube on the outside, a year later this was changed to a MIC-KEY button (14fr for those that want to know size) which is a lot smaller, doesn’t have the bung but a balloon filled with water and no tube on the outside, I call it Toby’s USB connector.

Whilst Toby had the PEG he was on the Ketogenic diet, a high fat diet to help with Epilepsy which involved making up complicated, exact, feeds four times a day, it was chemistry not cooking and after a year he came off the diet as it wasn’t helping control seizures as much as we hoped.

Toby was nearly 3 and was now pump fed 4 feeds per day of Paediasure Plus, a formula milk. Amongst the other medication he was on we regularly administered Movicol to help bowel movements, when he did go it was usually watery loose stools.

As ‘foodies’ it seemed counter intuitive that he should have something so artificial so we began to explore and started by blending prunes with apple juice and giving that instead of the movicol.

We rapidly saw a change in Toby, he no longer needed the drug to do to the loo and for the first time in years and his stool were beginning to firm up with the additional natural fibre.

Slowly we started adding more food into his daily plan however I was still unconvinced, I was struggling to understand his calorie count, total volume, vitamins etc and then the penny dropped, we didn’t need to count all these things, he’s not on a medical diet, he’s on a normal diet for his age.

Once I got my head around ‘just feeding a balanced diet’ it became a lot easier, we aimed for varied meals with lots of goodness, low fat, sugar and salt and Toby thrived. We started with simple meals of weetabix or porridge blended with fruit and moved on slowly from there.

We kept a detailed food diary and discussed it with our (very) supportive dietitian who advised us to add a small amount of vitamin drops and increase Toby’s milk to get more calcium but apart from that he seemed to be doing really well.

As well as all the reasons for real food there are ones against using formula. Whilst it does contain all the nutrients the body needs it also contains a lot of sugar, corn syrup to be exact, the same stuff that’s in Coke. We were giving Toby roughly the same amount of corn syrup as a litre of Coke, per day! Would you give a 3yr old that much?

The obvious one is his bowel movements, not only is he regular and firm we’ve been able to do toilet training and he mostly goes to the toilet, a massive thing that we never thought would happen and is another step to ‘normality’

Giving Toby real food, often our leftovers is also another step to normality, why should he eat any differently to other children? If anything he eats far better than any of his peers as he doesn’t have a choice or the ability to refuse. From fruit and vegetables to fish, lentils and magic prunes he gets the lot, he also doesn’t get pizza, chips, nuggets etc so has a really balanced diet.

The overall indicator for us is that he looks good, he’s tall, well proportioned, bright eyes and good hair and nails, all the signs of a healthy diet. 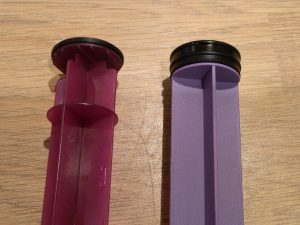 We jumped straight into buying a Vitamix (see link over on the right hand side under equipment) which was the brand recommended by everyone, it’s not cheap at over £500 but it’s amazing. In December 2017 I found the one thing it couldn’t blend, a spoon, it cracked the jug and made it unusable. Vitamix were great and couriered one out to me the next day but in the mean time we borrowed a Nutribullet, whilst not as powerful and obviously smaller it does the job great, we still use it a couple of times a day and it’s a fraction of the cost.

Toby has a 14fr Mic-Key button and we use a normal extension set with 60ml syringes, you need the O ring ones as the ones with the big rubber bung are a nightmare to wash and re-use, they’re pretty much single use only whereas the O ring ones last weeks.

To suck up the feed from the Nutribullet jug we get an extension set and cut it to about 8inches long and use that as a ‘straw’ to get the feed into the syringe.

Once blitzed we use a pyrex jug to measure volume, suck up the mix with a cut extension tube.

One question we’re often asked by people who feed Toby is around rate, how hard we push. Our old pump would run at 400ml per hour at it’s max speed, a 300ml feed should take around 40mins by that logic but we often do it over 30mins with a slow, steady pressure.

He has a break every 50mls or so when we top up the feed from the jug, like I would pause whilst eating.

As I said above, we started with blending prunes with apple juice to replace movicol, we’d do a batch and freeze in ice cube trays  and just pop one out each day, defrost naturally then push through.

We graduated to a breakfast feed of a whole Weetabix, whole milk, prunes, all blended together and pushed slowly through the tube.

As we got more comfortable we began to experiment with different food stuffs to make different blends. Toby is completely unaware of the feed going in so we can pretty much add whatever to the mix, mackerel and mango? No problems!

Now we do one of two things, if there’s some of our leftovers in the fridge (like a curry, chilli etc) he’ll have that or we batch cook ingredients so we can throw a ‘meal’ together quickly.

In the freezer, in ice cube trays then popped into bags you’ll usually find:

To make a meal we just pull out what’s in the fridge and add in whatever else is needed. If we have some left over fish, we’ll just add veg and lentils. We could scramble an egg and add in veg and pasta. Mix and match is the key.

We’ll nuke the meal in the microwave ahead of it being needed so it can cool to luke warm, or, if using frozen veg will leave them out and once the meat is cooked we’ll blitz it all again using the frozen element to cool the just cooked bits.

Potion control is often a big concern for people outside of the home, for stays in Helen House Hospice we’ll suggest the staff make up a plate of food that a normal 4yr old would eat from a volume perspective then tip that into the blender with some water and it’s Toby’s dinner. Once they get their head around that it’s all fine.