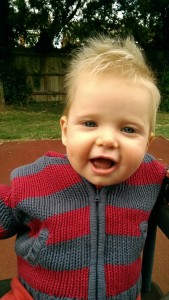 I know this site is pretty new but Kim and I wanted to ensure we carried on keeping it up to date so what better way than a monthly progress report of sorts?

August has been, relatively, a lot better for Toby. We had nearly two months when he was having major seizures probably 5 days out of 7, the longest of which was 78mins and for the first time we had experienced the stress of being in an A&E Resuscitation bay when they called for an Intensive Care Crash team, not something I’d wish on any parent.

However, things are looking up, he had two weeks without a major seizure and just had to contend with the partial jerks that occur dozens of times through the day. Whilst a lot less severe these jerks are always worrying as they can build up to a longer, major seizure. Without the strong rescue drugs knocking him out and impacting on his sleep we’ve really noticed a difference in Toby’s development. His sitting is lots better as is his hand/eye co-ordination and his eating, well, that’s off the chart!

As well as all the scummy food his Gran & Nana are making Toby has decided he loves sausages, chip (only one!) and whilst out celebrating his Grandpa’s birthday discovered a taste for goats cheese on bruschetta, the boy has rich tastes.

Toby has also been getting to know his new friend Ruth, a member of the Complex Needs Nursing Team who gives us an afternoon’s respite care every couple of weeks. He loves being the centre of attention and gets to spend hours on the floor playing with her.

Today Kim is off to meet Social Services to see what sort of help is open to us, at the moment Toby’s educational needs are pretty normal but over time that will change. Our key issue is respite, especially as Kim considers returning to work. Due to the seriousness of his seizures he always (24hrs a day) needs to be with someone prepared and trained in CPR, administering dangerous rescue medication and giving oxygen, not your everyday requirements so we’ll see if we can get some extra support or specialist nursery care.

To finish on a positive note, Toby loved his first go on a swing and as you can see, his hair isn’t getting any more controllable!