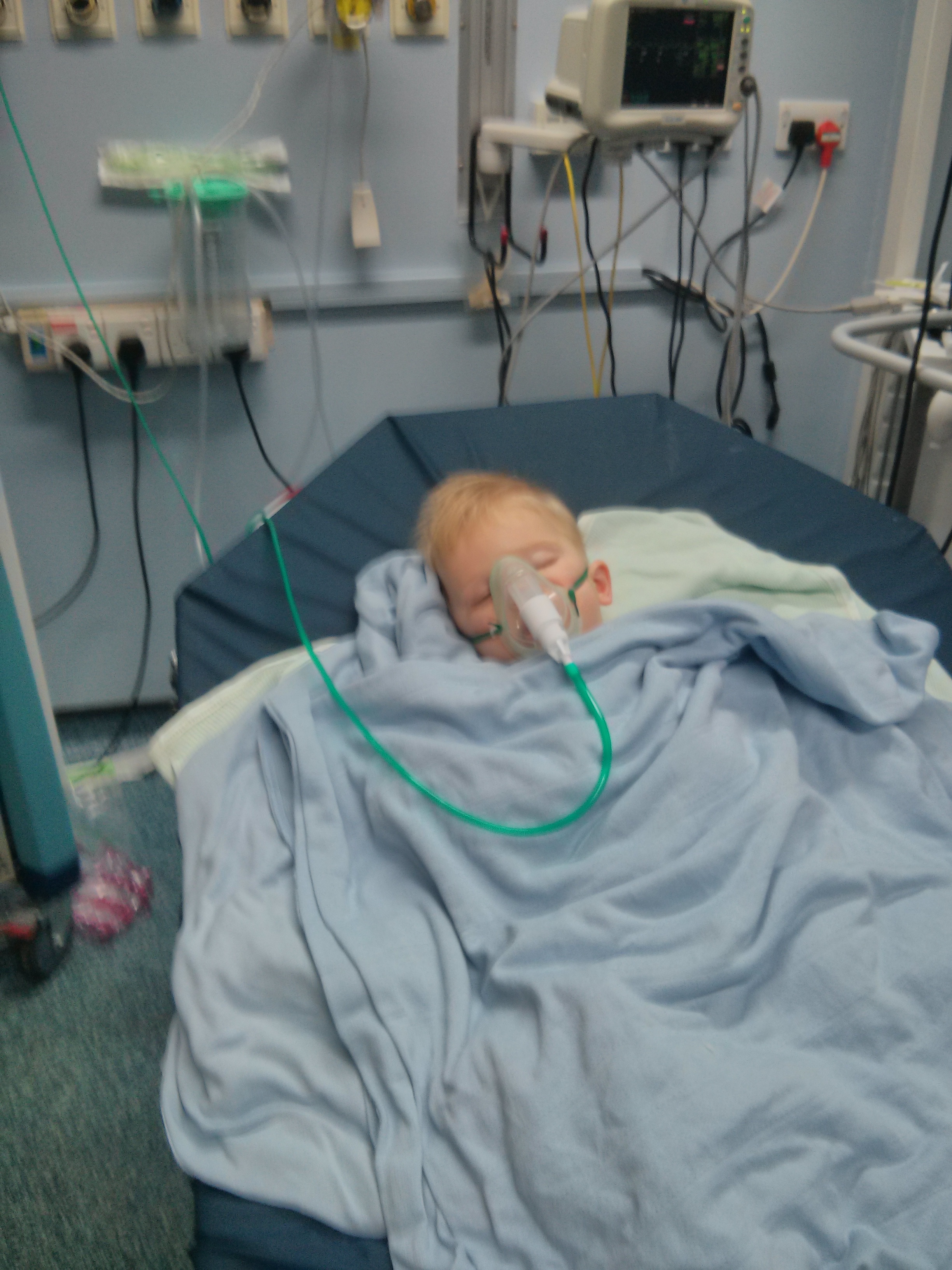 We ended November and entered December in a desperate place, all of Toby’s seizures were lasting over an hour and were increasing in their frequency and often occurring during the night. After a weekend of hundreds of partial seizures and a day where we administered rescue medication 3 times followed by a 2am dash to A&E on the 1st December we knew something had to change.

Sadly all our consultant in Milton Keynes could offer us was a bed and monitoring in hospital which we weren’t happy to accept as the wards were full of poorly kids with chest infections, something try to avoid at all costs, and we were at breaking point so couldn’t face a week in hospital. Due to resource issues Oxford’s neurology team were unable to help and in desperation we called Helen House in Oxford to ask their advice.

One of the Doctors, Emily, called us back within the hour to talk the situation through. After we’d explained that Toby really wasn’t good, no one seemed to be able to help us and we were physical and emotional wrecks she simply said “come and stay with us for a few days.”

The relief we felt was overwhelming, someone cared and wanted to help us all, we cried.

Going back to Helen House was amazing. Being around people who understand the situation and can really empathise is so important and helpful.

Whenever someone checks into Helen House they are admitted properly, like in hospital, by a doctor. Helen House do things a little differently in that they employ a lot of doctors on a part time basis so they have skills from GP’s (Emily works in Hanslope a few miles from us) to Oncologists and other specialists, all who work 1-2 days per week. This means that there is a huge amount of highly skilled help always on hand.

Not long after arriving, Peter, one of the doctors, sat us down in the dining room to admit us and do all the paperwork. He brought with him a huge folder containing all the correspondence from Oxford and MK hospitals which he’d ploughed through to get an understanding of Toby’s situation. He was also very, very nice and talked to us informally like adults. For the first time in ages we had a doctor taking a proper case history about Toby, going into the real detail and understanding what had been going on.

At this point a second doctor, Rene, joined us. The first thing she did was pick Toby up for a cuddle and started playing with him. For those of you with children you’ll know what it’s like that despite being shattered you know you have to be fun and energetic for your child’s sake, so being able to hand over your child to someone who can be both is a real weight off your shoulders.

Now with two doctors to talk to we continued to explain, discuss and listen. While neither of them were neurologists they understood complex illness and the impact it has on the child and the family. By the end of the best two hours either of us has ever had with a doctor (let alone two!) we were admitted to Helen House and had several actions planned out.

The doctors immediately wrote to the neurologist we’d seen the week before to validate that Toby’s drug doses were correct (I’d looked them up, Toby’s now on 50% more than the licensed dose of a heavy sedative) and then they wrote to our MK consultant and GP to say that they’d changed the order of his rescue medication as it clearly wasn’t working. Finally we discussed a referral for a second opinion.

As Oxford neurology team seems to be stretched (our Neuro has heart issues so unlikely we’ll see him as a regular Neuro) we wanted consistency, we also wanted to find someone with experience of treating Dravet children and the drugs used. After asking around a couple of names came up and we’d decided we wanted to try for a referral to Professor Helen Cross who is based at Great Ormond Street. 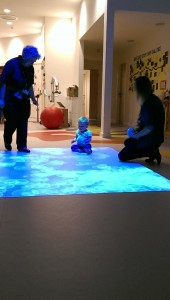 Not only is rare epilepsy Prof Cross’s ‘thing’ she also sits on the board of a charity called Matthew’s friends which supports families on the Ketogenic diet, the next treatment we might try for Toby. She is also one of the prescribing centres for the new cannabis based drugs that started a trial last week. Due to these three elements we feel she could help Toby both in the short term and in the longer term as she understands some of the existing and new treatments.

As part of our conversation with Rene & Peter at Helen House they totally supported our desire to get a second opinion and actively worked to make it happen. They wrote to our consultant and neurologists and asked them to make the referral, something which happened within a week.

I cannot describe how good it felt to be talking to people who not only really cared but acted quickly to make real changes.

We were in a hole, they picked us out, gave us a big hug (literally) and got us going again.

The next couple of days were a bit of a blur, the care team were amazing with Toby and gave us as much time as we needed to put ourselves back together. However by Saturday morning we were dreading going home as we felt the cycle would start again with a big seizure, back in hospital and all of us broken. What made things worse was that Toby’s face was swollen and he had a rash down his back.

Concerned, the care team called in the duty doctor (Hannah, who initially ‘assessed’ us months ago and is lovely) who took a look at Toby and thought it was a reaction to his MMR immunisations a couple of weeks ago. She could see how nervous we were of leaving the safety of Helen House so just looked up and said “stay another night” – the relief was immediate and we both started to cry.

We left Helen House the next day feeling a lot more rested, positive and able to cope. 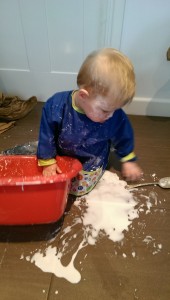 It’s a relatively new phrase that’s entered our everyday vocabulary from America when stores slash prices a couple of weeks before Christmas to get sales moving. However, there’s been a black Friday in the UK for years that most people are blissfully unaware of.

The Friday before Christmas, when lots of people break up from work and go to their parties or out drinking.

It’s a nightmare for the emergency services.

It’s the one day we could have done without Toby having a sixteen minute seizure at 3pm.

Once again the crews were amazing, our friendly Emergency Care Practitioner, Mike (almost as qualified as a doctor) was first on scene just as Toby came round, followed by an ambulance crew with a couple of paramedics we’ve met before. They spent an hour with us making sure Toby was ok and were absolutely amazing. They worried about their ability to get to us if he had a second seizure but rather than pressuring us to go into hospital to be safe they talked through options of stationing ambulances closer to Olney and us having direct access to their control room.

These guys are amazing. 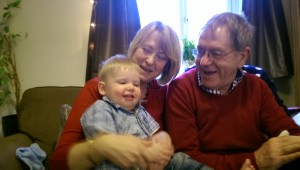 The lead up to Christmas wasn’t too bad, the new drug doses seemed to be helping with Toby’s seizures but it did impact his mood, being so sedated took the sparkle from our little boy which was hard to see.

The fear of leaving Toby coupled with our levels of exhaustion has meant that we haven’t enjoyed the build up as much as we would normally, no going to visit friends or out for drinks or helping with the town Christmas decorations has impacted on us as it’s part of who we are. This is where Dravet is really cruel as we can’t even have a shadow of the life we once had, we never drink so much that we can’t drive or react to a serious seizure.

However we are incredibly fortunate that our parents have moved down to be near us. Thanks to them we were able to make it to our favourite pub, The Cowper’s Oak, on Christmas Eve for a drink. We were only out of the house for an hour but it was a big step for us, and we are so grateful to our parents for making it possible.

We have all suffered under the pressure of ‘will Toby have a seizure on Christmas Day?’ but fortunately we were able to enjoy an early Christmas meal with Aunty Karen and Uncle Andy and a seizure free Christmas Day with food, laughter and lots of presents which was great an a massive relief.

One of the best presents was just before Christmas, our referral to Prof. Cross has been accepted and we have a date in March to see her at GOSH.

I’m writing this on New Year’s day, the least hung-over I’ve ever been on this day since I was a teenager! Coupled with the lack of drink we can consume we’ve all had horrible colds so managed to stay up late (10pm) before crashing out last night ready for the inevitable early start that any parent faces.

2014 wasn’t the year we were expecting at all however out of everything bad comes a huge amount of good. The support we’ve had from friends, family & strangers alike has been overwhelming, I can’t tell you how often we are stunned by people’s physical, emotional and financial generosity. We now have an incredible network of people around us, professionals, family, old and new friends, you all make us feel very valued and loved.

To all of you, thank you and we hope 2015 is a fantastic year for you.