Blink and you miss it, that’s what February felt like for us!

Toby’s seizures have been fairly consistent with one to three 2 to 5 minute seizures most days, difficult but more ‘manageable’ (it’s all relative) at home as we didn’t need to call an ambulance although he does stop breathing and needs resuscitation nearly every time which is pretty scary.

Sadly he came down with a cold halfway through February and as soon as we saw how poorly he was we were scared as we knew what might happen. Despite being on tenterhooks he made it through the night without incident but after witnessing the famous Olney Pancake Race he had a series of small seizures which didn’t respond to rescue medication and he had a full blown tonic clonic lasting over an hour. Kim was on her own but dealt with it brilliantly, managing to keep him breathing whilst administering drugs (nasty smelling stuff up his bum, it really isn’t nice) and calling for an ambulance.

After a hairy ride in the ambulance to Milton Keynes hospital thankfully he stopped seizing just after he arrived at Resus in A&E. He was still poorly with a cough, cold and a temperature of over 38 C, so we agreed to stay in hospital until his temperature had come down and we were out of the danger zone. Turned out to be the right decision as he had another short seizure around 6pm and then another at 1am.

We were looked after really well by a couple of the nurses on the ward and they responded really quickly when we told them that Toby could not have any more of his ‘normal’ rescue meds so we’d need a different one on standby. They got it from pharmacy and had it ready for us within 15mins which, if you’ve ever been in hospital will know is lightning speed!

We got discharged the following day and took the poorly boy home, just in time for me to go in the next day for a hernia operation and a lovely visit from Kim’s cousin and her boys.

We’re very lucky to have all the support around us that we do as our parents have been invaluable in helping us keep those all-important eyes on Toby all the time and helping Kim out with the day to day of looking after a demanding boy. Toby’s also quite high maintenance, he inherited that from me! 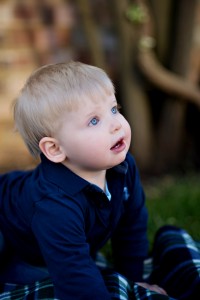 We’ve being trying to support those that help us over the last few weeks by telling our story so that support services can use us as an example of what they do. Helen House posted a story about us on Valentine’s day and the Communications Manager for South Central Ambulance Service came around to meet us so he could write an internal article about how the Ambulance service have gone ‘above and beyond’ to work with us. It’s not a lot but it helps us to feel useful if we can help other people and educate them a little about Dravet Syndrome.

We also had the brilliant Siobhan Murphy around to do a photoshoot, she got some great shots, among them the ones in this post, before Toby collapsed into a seizure. She got the full O’Grady experience witnessing all that we do during a seizure, sadly a very real possibility if you come to see us.

Next month is Toby’s Tapas, thank you to everyone who has booked a table, it’s going to be a great evening.

If you’re looking for a great night out then please take a look at The Gig for GOSH on the 18th April being run by a local family who have been really supportive to us. It’s going to be a great night and all proceeds go to Great Ormond Street Hospital where we have an appointment in a few weeks time.