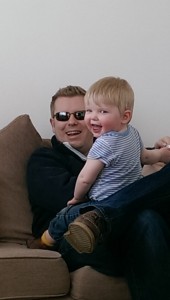 Cheeky smile from the boys

Dare I say it but April hasn’t been too bad for Toby, although I’m touching wood as I write this.

Whilst he hasn’t had any prolonged seizures this month he does tend to have at least one or two short tonic clonic seizure every other day. They usually last less than three minutes which is still three minutes too long but it’s better than the thirty, forty and even sixty minute ones he was having in December.

The upside of Toby’s seizures being shorter is we’re not pumping him full of horrible ‘rescue medication’ that knock him out, we’re not calling 999 or ending up in hospital which wipes us all out. Sadly though his breathing is still impacted quite a lot and we have to resuscitate him regularly and put him on oxygen during each seizure. We’re also pretty sure his heart stopped for around five to ten seconds during one seizure which was very scary. 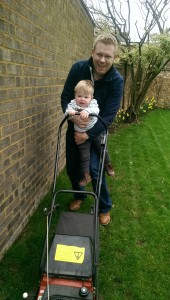 Toby needs to earn his keep by doing odd jobs around the house!

Now that daily ambulance and hospital trips aren’t the norm we can concentrate on Toby’s development more, sadly because it’s more of a focus we see the real impact of Dravet coming out as he’s well behind his peers on walking, playing, communication and of course eating.

For the last couple of months Toby has refused virtually all food with the exception of the odd bowl of porridge when he’s been feeling good. We have a food replacement milk from the hospital called Paediasure which he’s meant to have 800-1000ml per day. We’re struggling to get 400-600mls as he refuses that as well. He’s a big lad so we’re not too worried about the calorific intake but he can get dehydrated which is a trigger for seizures so it does become worrying. Toby has his first consultation next month to see a surgeon about the PEG which will give us a tube straight into his stomach, not what we want for our little boy but if it means we can ensure he is getting enough fluids and solids then it’s what we need to do.

Toby’s muscle tone is still really low so while he crawls around everywhere, and at a pace! He is reluctant to stand, he’ll pull himself up and lean against something but it’s only in the last week or so that he’s started to ‘cruise’ a few steps along furniture. The physio is really pleased with how he’s coping with his little boots and says she sees and improvement each visit which is nice to hear.

Sadly it’s becoming very apparent that Toby’s fine motor skills are either delayed or damaged, while he can pick things up he has no finesse, he can’t use his forefinger and thumb to pinch things and the ‘simple’ baby tasks of posting items into a box are often beyond him. He managed to put some blocks into his train just yesterday but the concentration it took was just too much and it caused a seizure. It’s so unfair that everyday tasks can trigger seizure activity. 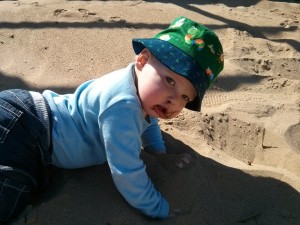 Not quite sure of the sand….especially the taste!

It’s not been all doom and gloom though, we had four nights away on holiday in Lincolnshire at a specialist holiday centre that caters for children with autism and other complex needs. It was lovely to be away and the place itself was great however Toby had three seizures within the first twenty four hours as it was all too much fun, be it the trampoline, softplay or trying out the pool it was just too much for him and the sensory overload caused seizures. We spent the rest of the week having no fun at all, well just a little bit, to ensure everyone was happy.

Once again we’ve been overwhelmed by the kind donations of so many people, this time it’s for the heros doing more incredible things. James Villette from Olney ran the London Marathon, despite being injured the week before he still completed the race for Toby, something I find truly inspiring. He’s still collecting all the sponsorship money in but we know he raised well over £500. We’re so grateful.

Coming up in May, Helen Peacock’s, one of Kim’s closest friends from school, is doing her first triathlon and she’s been busy raising loads of money, best wishes to her in what will be a tough event. We think she’s amazing!

May will be a tough month for us, Toby has appointments scheduled with the dieticians to talk about the Ketogenic diet which will be a huge change for us, it’s a super high fat diet (think Atkins on speed) that is well used and often effective treatment for severe epilepsy that is drug resistant.

Before that though is his pre-op assessment for getting the PEG fitted so we can feed him through a tube into his stomach. It’s the right thing to do as Toby’s now getting fussy about taking the milk we give him and as it’s his only form of food and drink it’s essential he does drink it, however, it’s still quite a serious piece of surgery and something that will mark him out as different to other little children.

Once again, thanks so much for all your kind words, thoughts and donations, we’re very lucky to have you in our lives.