It’s my own fault, I know it it. Starting off last months update with ‘it’s been a good month’ was tempting fate just too much.

On Friday the 1st May we had a long meeting with Social Worker Sue and a lady called Gill from the Continuing Care team, Toby was on good form, we were in a good place and it was a nice meeting at ours over tea and biscuits. One aspect that we discussed was how quickly life with Toby can go from good to bad, we didn’t expect it to happen quite as soon as it did.

Toby hasn’t really taken any food for a few months now other than the Paediasure shake we get on prescription, over the bank holiday weekend he decided that he wouldn’t take that, or anything else liquid either. We persevered and tried to get him to drink something but to no avail, on the advice of the Helen House doctors (who we can access 24/7 via phone, phew!) we took Toby into hospital.

Fortunately it was the lovely Dr Ali on duty who’s known us and Toby for a long time so it wasn’t too stressful explaining the whole situation. She took blood (never a nice process as Toby’s had so much taken his veins collapse as soon as a needle is stuck in as they are so weak) to assess his levels of hydration and liver & kidney performance and then gave him a good examination. She thought he looked a little dehydrated but nothing too severe so sent us home to see how we got on, perfect result.

That was until 4pm when she called back and said according to his blood work he was severely dehydrated so he needed to be back in hospital to have a Nasal Gastric (NG – up his nose and into his tummy) tube fitted and rehydrated with special solution. Kim reluctantly took him back in knowing that a stay in hospital is not a good thing for Tobes.

During the first 24hrs he had the worst day of seizures in terms of numbers he’s ever had (I suspect the fluid they were using was too high in electrolytes for his sodium chanel epilepsy but no one else agrees, what do I know??) and as sure as eggs is eggs, he caught a nasty cold.

Three days later we finally make it home to face one of the most challenging weeks we’ve had.

Both Kim and I had seen different dietitians who had given us different guidelines on what Toby should be consuming from a calorific point of view, as a result we were arguing, never a good thing. We managed to get clarification and new targets around calories and liquid intake but they were huge and complex to implement. If he ate something instead of a bottle we could count it towards his calorie intake but had to increase his fluid to compensate. In total we were trying to get to a total of 1.2litres of fluid a day into Toby.

Did I mention that he has to sit perfectly still while we do this?

did I mention that it took 1 min per 1 ml of paediasure to go down the tube as it’s thick and the tube is thin.

Roughly 4-5hrs per day to keep him going…all when he was asleep, without disturbing him.

It didn’t happen, it got stressful, for all of us.

And Toby was really poorly, grumpy and at serious risk of major seizures.

After a week or so of this we were at breaking point so the appointment to discuss the PEG (tube through his skin into his tummy) was a lifeline, we told the doctor everything, she told the surgeon, he agreed to do it…in September.

The light at the end of the tunnel became a tiny pin prick. How could we go on like this for months?

This is where Toby’s Trust comes into it’s own, we started to research going private for the operation as, thanks to you kind reader, we have the funds available for such an emergency. Sadly BUPA don’t have any surgeons who will operate on an under 3yr old but they did put us in touch with a couple of surgeons who would do it privately.

By now it’s the middle of the month and we’ve a stay at Helen House booked, we were desperate to get there and get their advice, help and support.

Dr Hannah checked us in, she is the most compassionate doctor we’ve ever met and totally understood out situation but talked us out of going private due to the potential complications that could arise due to Toby’s condition which a private hospital wouldn’t be able to cope with. 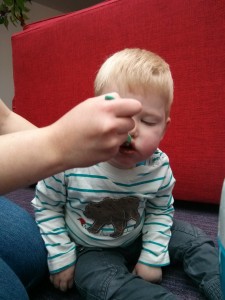 Over the weekend the care team looked after Toby brilliantly, they managed to get him eating a bit, particularly chocolate cake…who cares what it is, he’s eating! They also helped calm us down around some of the targets around intake and we reverted to ‘we’re his parents and we know best’ so reduce some of his intake slightly. They also showed us how to entertain him while also feeding down the tube, not easy but more manageable than trying not to disturb him in bed.

As usual, the weekend at Helen House did wonders for us, it was my big birthday and was fantastic to feel that Toby was safe enough to leave him, we even managed a night away in a hotel and lots of friends came down to Oxford for a glass or two (we drank a large bar completely dry of prossecco….not a bad achievement) which was lovely.

We left Oxford and headed to Bristol for our first appointment to discuss the next, and last, option for Toby’s treatment, the ketogenic diet.

This is an ‘extreme’ medical diet where the body’s main fuel source is fat which the body burns and produces keytones which are great for brain development and seizures. Think Atkins gone mad. It’s all double cream, fat and oil and very little else.

We are desperate to try anything to help Toby but were dreading the diet, it’s very complex to prepare, not palatable and yet you have to be very exact with it. At least the NG tube and the PEG will enable us to get a liquid version of it straight into his stomach so we will be accurate in his ‘dose’.

Toby has to have a couple of more tests before we can start the diet but hopefully at our next appointment in June we’ll be on track for it. The one thing that lots of other parents report is an increase in developmental behaviour which would be great as in some areas Toby is now nearly a year behind his peers, anything that potentially helps has to be a good thing.

As the month drew to a close I happened to pop into a pub in town, The Two Brewers for a pint, Christine the manager told me of their independent music and arts nights and that Ian Roberts, the guy who ran it would be interested in supporting Toby.

Long story short, we emailed, we spoke, I cried.

Within the space of 24hrs Ian had arranged for the next gig to be all about Toby, artists would offer up their work to be raffled, he’d posted on local social media to get support moving and even got the local magazine to include a piece to promote the event the day they went to print.

We have never met Ian.

Stop for a moment and imagine that, someone who you’ve not yet met pulling out all the stops to do something amazing for a member of your family, words don’t come close, it really is incredibly emotional. We are so lucky to be surrounded by nice people and live in a beautiful little town where people not only care, they really, really care and then do something about it.

Life has thrown us a curve ball to say the least and I wouldn’t say that we wished it hadn’t but everything happens for a reason and if Toby didn’t have this condition we wouldn’t have met, talked to and been supported by hundreds of amazing people who keep us going through the darkest days. Thank you all for being so supportive, we mean it when we say we can’t do this without you. 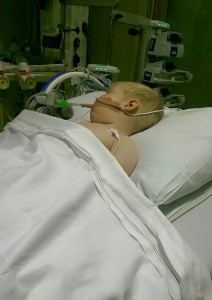 I wrote this post earlier this week but held back from posting to see if anything else happened during the week, I had no idea what was in store.

On Thursday Toby was very upset all day which is unlike him, he had two short seizures in the afternoon but when we put him to bed he was very disturbed. At 9pm he entered a prolonged seizure, we gave him all the rescue drugs we could and waited for the ambulance, by the time we got to hospital and stabilised he had been seizing for 80 minutes. A very long and scary 80mins.

Once he was ok and recovering we took him to the ward around 1am where he started shaking and shivering violently which turned into another seizure.

Despite having all the drugs available in hospital the seizure wouldn’t abate so after 90mins the decision was taken to induce a coma and intubate him and put him on a ventilator to breathe for him.

We have never been so scared as watching the team work on him and seeing drug after drug fail to work.

Having him intubated is serious and needs Intensive Care, sadly Milton Keynes doesn’t have the level of equipment required so transport was arranged in a special ambulance that is Intensive Care on wheels to take him to Southampton, the nearest Paediatric ICU.

The doctors have taken Toby off the drugs which were keeping him in the coma and now it’s a waiting game to see when he will wake up and how he is.

We’re very fortunate to have been offered a bed in a Ronald McDonald ‘hotel’ on site that’s used by parents of sick children, the generosity of charity in the country continues to astound us.

Hopefully the next pictures on Facebook will be of a smiley little Toby.