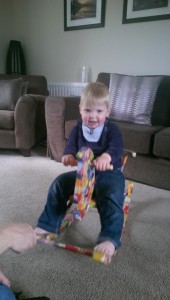 It’s been a pretty good month and it feels nice to write that. There have been some lows, there always is but there’s been a lot of highs which makes everything feel better.

We started August with Toby recovering nicely from his PEG operation and us getting used to feeding him through the tube, it’s great him not having the tube up his nose and his face raw and bleeding from the tape and so much easier to get the feeds into him.

The ketogenic diet that Toby started in July seems to be showing positive signs. The tiny seizures that are really hard to watch have been impacted and are greatly reduced and the large tonic clonic, fully convulsive seizures are a bit further apart and so far have been a bit shorter. Sadly they are still very scary as they cause Toby’s diaphragm to ‘freeze’ so he stops breathing and goes blue very quickly, almost every seizure now we have to administer ‘rescue breaths’ to get his lungs working again to take in the pure oxygen we administer.

Weirdly the reduction in seizures is a double edged sword, it’s great, don’t get me wrong as we don’t want to be in the place we were last year with ambulance daily and frequent trips to hospital however now we get out of practice, we are not quite as ready to respond when he does have a seizure and it knocks us for six when he does. It doesn’t get any less upsetting every time it happens.

The really positive thing about the diet is that it seems to be helping with Toby’s development. Over the last few weeks he’s really come on. He’s a lot sturdier on his feet and cruising a lot more comfortably. He can find objects out of a pile when you show him a photo and post objects into a container. He’s still a way off where he ‘should’ be but it is so encouraging to see him being able to focus during this quieter periods.

The major ‘high’ in August was the big head shave. Incredibly Georgia Brock volunteered to shave her head for Toby’s Trust after her little sisters christening.

The Brock family have been so welcoming and supportive towards us we can’t thank them enough. They invited us along to watch, we took Toby for a short while to the party on a scorching August day, sadly it was a little much for him so he didn’t stay long but I stayed all afternoon to see this brave young lady lose her hair.

Local hairdresser Louise agreed to ‘do the deed’ and after plaiting and measuring Georgia’s hair found out it was long enough to donate to the Little Princesses Trust which gets hair like this made into wigs for poorly children who lose theirs. Then it was out with the scissors and then the clippers, sure you’ll agree Georgia looks stunning with her new look.

So far she’s raised over £3,265 for Toby’s trust, an absolutely staggering amount of money which has left us completely speechless, something that doesn’t happen often.

Not only has she raised all this money but as part of her Duke of Edinburgh award she wants to help care for Toby as part of the community and skill elements. What a lady, she’s pretty amazing!

On the same day our good friend Samantha (on the right with her friend Ally and their medals) took to the sea and completed the Bournemouth pier to pier swim in under 50 mins, an incredible time through choppy waters, swimming against the tide.

Samantha raised over £230 for Toby’s Trust and we think she’s pretty brilliant for doing something so brave.

We’re very lucky to have a great team of professionals around us who do loads for Toby, from speech therapy to physio, we also have a great Occupational Therapist (OT) who has helped us with some new kit for Toby.

Due to Toby’s low muscle tone, his high chair was not supporting his core effectively so we needed something more specialist that would encourage him to sit properly. Pauline, our OT, applied for and got a specialist high chair on wheels which provides him with support in all the right places. It’s a little scary looking but it does the job brilliantly. 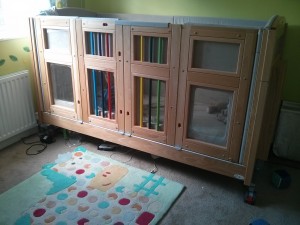 The other thing we needed help with was his bed for a number of reasons. He’s getting tall and was at the point of being able to throw himself over the rails of his cot. We have been putting increasing strain on our backs lifting him in and out of his cot so needed side access and the ability to adjust the height. When he has a seizure we often need to sit with him while he sleeps it off to ensure he’s ok and tilt the bed to help with his breathing issues. We are so grateful that our OT recognised the issues we are facing and has ordered us a high sided bed with padded sides, that is like a hospital bed so the whole thing lifts up and down and the mattress can tilt so we can put him at an angle to ensure his airway stays open.

It takes a little while for the bed to be ordered and delivered so Pauline got onto the New Life Charity, explained the situation and they’ve lent us a similar bed until Toby’s arrives. It’s a fantastic bit of kit and already we can’t do without it but it’s a stark reminder when you see other children on Facebook going into their ‘big’ bed for the first time that despite coming on leaps and bounds Toby is different.

As ever a big thanks to everyone who supports us, we couldn’t do this without you and thanks to a lot of people we’ve managed to have a few more days out to enjoy ourselves. Like any parent, a young child consumes your time and energy and we’re no different except the care is relentless, 24 hours a day, it never stops so being able to go to a spa, cookery course and driving day is really important for us to keep our sanity, thanks to our parents who help out with looking after Toby when one of us is out.

We’re looking forward to a Helen House visit in September as it’ll give us a chance to do something as a couple, safe in the knowledge that Toby has the medical support he needs. Sadly our planned visit in August was cancelled as they had some emergency admissions. Whilst it’s a shame we couldn’t go the reality is they had to look after a really poorly little boy or girl and needed it more than we did. Saying that we can’t wait for a break and the opportunity to have some fun.

Until next time, thank you again for everything you do for us.