Apologies but I can’t open another update on a positive note, every time I write about good stuff that has happened recently life throws a curve ball and it all goes a bit pear shaped. 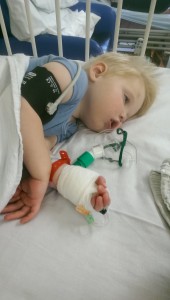 After I’d posted the August update we had a good weekend with Toby although Kim was feeling ill with a cough and a cold. Toby must have picked it up because on the Monday morning he had a seizure not long after waking up, something that’s rare for him.

He then had a couple more seizures during the morning, all around 2mins long which is a long time if you’re the one having the seizure. Kim was at work and kept getting text updates….”another one”, “and again” etc. Thankfully I had my mum and dad with me for support, so I didn’t have to deal with it alone.

By mid-afternoon he’d had eight tonic clonic seizures. To try and relax his brain and bring them under control I administered a small dose of midazolam (stronger than diazepam which is also sold under the brand of Valium) but it didn’t work. Almost immediately he had another seizure, this one was more serious as he stopped breathing. Within 20seconds he was blue due to lack of oxygen and I had to perform mouth to mouth to trigger his diaphragm and get him breathing again. Once he was breathing on his own I put him on oxygen and dialled an ambulance.

Getting him into A&E didn’t take too long (bizarrely it was my first ride in an ambulance as Kim always goes with him) and he seemed to have perked up so was playing on the floor when he suddenly went into another, more powerful seizure. Whilst the doctor maintained his airway we rushed him into ‘resus’ (the resuscitation room where serious incidents go – we usually start there!) and gave him more midazolam while the docs called for the crash team. Fortunately the seizure lasted around 7mins so they assisted with his breathing but we were out of the danger zone.

Something definitely wasn’t right so Toby spent the night in hospital where we could keep an eye on him and have everything too hand. Sadly he had another seizure as soon as he woke up but it was the last of the day so we got out of hospital later that afternoon.

Fortunately the rest of September was a lot better with Toby’s seizures, we even had 13 clear days without a fully convulsive tonic clonic seizure, something that hasn’t happened in over a year. 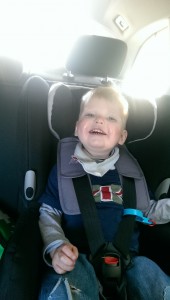 Who knows? Is it the new ketogenic diet (super high fat so the body produces and uses ketones for fuel rather than sugar) or stability with drugs or just his age? There’s no real way of knowing exactly what is making him a little better, what we do know is that his small partial seizures have improved as well and as a result his development is coming on leaps and bounds.

We can see Toby picking up new stuff all the time, he now ‘says’ “up” when he wants to be picked up, he’s cruising around the furniture a lot more and even now taking steps with a lot of support as he’s very unstable. Cognitively he seems to be making small steps forward and physically he’s trying his best.

It’s great seeing him make progress but it’s tough been around other kids his age or younger as it’s obvious just how far behind he is which can be upsetting. 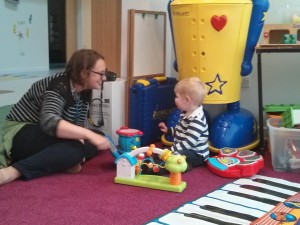 Towards the end of September we had a long weekend in Helen House. After a tough couple of weeks we felt like we ‘limped’ there and really needed the support of the team there. We try to go every 6 weeks or so but our last visit had been cancelled as HH has some very poorly children they needed to support, it’s tough but we totally understand the service they offer and that they wouldn’t cancel unless they really needed to.

It was lovely to see lots of familiar faces and Toby was soon settled in to the routine of playing, feed, play, feed, sleep, play….he really does love it there.

For the first time we were brave and left Toby overnight (we stayed away on my birthday but my parents stayed in HH to be on hand for emergencies) so it was a big thing for us. We headed off to the Cotswolds where we had a night away in a gorgeous hotel which allowed us to properly catch up as a couple and remember the people who we are underneath the stress and anxiety that every day brings.

On the last day of our visit there we had a session with a couple of ladies from the HH Fundraising team as they want Toby to be the ‘face of Christmas’ for this year. Toby’s story and picture will be used to illustrate how important fundraising for the hospice is and to pull on some heart strings to get donations coming in. It’s great that we can give something back to help them, even if it’s only time, words and a picture, it feels like we can do something to help those who help us. 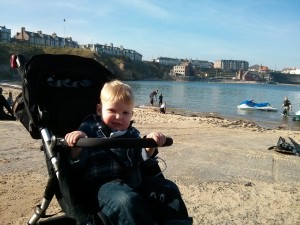 Massive thanks this month to Ian Simpson who ran the Great North Run and asked for donations to Toby’s Trust, he raised nearly £400 whilst taking part in the race around the North East. Once again Ian is one of those people who don’t know us that well but has taken Toby’s story to heart which we find so overwhelming and generous, thank you.

We’re currently away, spending a week up in the North East with all our Geordie friends who have been so lovely and supportive. It was a tough decision to risk the 5.5hr drive but Tobes was great and it’s been well worth it. We’ve had fantastic weather and the change of scenery and being around lots of people who we love and who love us seems to have done us all the world of good. Feels good to end the month on a positive note…..quickly touch wood!