We started March in a brilliant way. Toby had a physio session at the hospital booked and we decided to both take him as he wasn’t on brilliant form and it’s always easier to cope when we’re together. Toby was as keen as ever to get into the waiting room where they have a bubble tube and some toys which he loves, after a while Naomi called us through so Kim lifted him onto his feet, held one of his hands and let him walk into the room himself. It was a major achievement for Toby and for us and was a real shock and surprise for Naomi.

We’ve been reducing some of his medications, in particular Clobazam which is a strong sedative and firmly believe that this reduction has contributed to Toby increasing his strength and stability. Lets not get carried away though, when we say ‘walking’ he’s very unstable and needs lots of support but, he’s up, he’s moving, it’s massive for us. 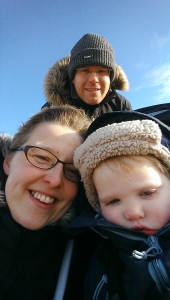 That weekend we went away for a few nights as a family to Norfolk, not somewhere we’d been before and quite risky for us as we’d done the research and seen that the nearest A&E was 45mins away. 45mins is a very long time if you’re watching a child have a seizure.

However, we were brave and packed the bus (Toby friendly Ford Galaxy, it’s massive and easy to get him into and carry all his gear, you contributed towards buying it and making all our lives easier. Thank you) and off we went. Journey was fine, Toby was fine, Norfolk was lovely and the apartment great however within 5mins of arriving Toby was on the floor convulsing. Fortunately, it wasn’t too long but even a couple of mins is terrible as there is no indication whether it will stop at 2, 20, 60 or even 90 mins. It did make us question our decision to be so far away from an A&E.

Once he recovered we had a fab weekend and Toby was on great form, chatting away with his ‘da, da, da’s’ lots in the buggy and us all going for walks in the rain on the beach. 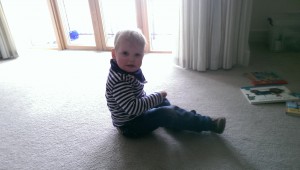 We’ve continued to take Toby to Filgrave Pre-School in a local village who have been wonderfully supportive of us all. We’re undergoing the process of getting an Education, Health and Care Plan for Toby which lays out all the things he will need and this has included visits to Filgrave by PORTAGE Paula and Ed the Educational Phycologist (he’s actually called Robin but he suggested changing his name to keep with the alliterative theme) to assess how Toby interacts and learns.

The plan is a complex process involving many professionals from all disciplines and once completed is a legally binding document that the council have to abide by. It’s great that our social services are set up to do this but it is a tough process with lots of reports, meetings and consultations, it’s exhausting as we don’t know what we don’t know.

As a result of this process Toby has been awarded a place at Redway Special Needs School in Milton Keynes from September and he’ll have some visits to the school next term. We’re a little apprehensive of what this means for family life and of course Toby but we’ll take it one step and a time and see how we go. The main benefit for Toby will be regular physio and speech therapy which could really help his development, not to mention medical support on site and near by (it’s next to the hospital) and an environment where seizures are not uncommon.

Toby’s generally having a couple of fully convulsive seizures a week that last a few minutes which, while terrifying and horrible is a lot better than it was last year or the year before, I’ve got a graph if you’re interested?

We aren’t having to call 99 to get the Green Team out to him and generally the seizures are less disruptive to us, however they are having more of an impact on him. In the past Toby could have a 20min seizure needing powerful sedative rescue medication and be smiling and bouncing by the time paramedics arrived. Now, a seizure lasting less than 5mins will see him ‘out of it’ in an unconscious post ictal state for anything up to an hour. The impact is also seen the next day as his muscle tone, general bearing and mood are all lower than normal.

Saying that, he usually has a smile on his face and an infectious laugh, everyone comments on what a happy little boy is which is incredible considering what his body and mind go through.

The thing we find harder is still his ‘partial’ seizures. Little myoclonic jerks, twitches and increasingly frequent absent seizures where he just switches off for a few seconds then is back in the room.

When Toby was having a lot more tonic clonic seizures they would come out of the blue and we’d react, running on adrenaline to keep him breathing, administer drugs and call paramedics. Now we have constant jerks that get progressively worse through the day and just wear us down.

We’re exhausted from just watching him jerk and twitch knowing there isn’t a lot we can do to help him, he falls, bangs his head and body as he loose coordination for those precious seconds and it’s terrifying as we know it may or may not go into a ‘big one’. We’re constantly on edge but the adrenaline isn’t there to carry us through. If you see us out walking in the late afternoon we’ll often be hurrying to a safe place or to get home as quick as possible in case the partial seizures escalate.

The week leading up to Easter was particularly bad, we had lots of appointments and meetings and Toby wasn’t great at all having up to 200 small seizures a day. The worst was Kim bringing him down to the hairdressers so Ashleigh who cuts my hair could trim his (frankly offensive) mullet. Literally as Kim was opening the door to the salon Toby went fully convulsive so I rushed over to administer oxygen and stop his feed pump running all in the full glare of the salon. It’s horrible and confusing for everyone else as they don’t know what’s happening.

I’m very pleased to say that Toby recovered enough and quite quickly so that he could have his hair chopped and he looks a lot better now. 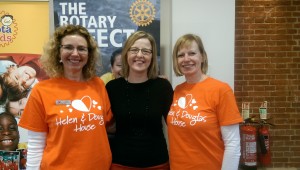 We obviously get a lot of help and support from Helen & Douglas House Hospice so it was great to be able to give back a little when they asked for help.

Claire, the CEO of the charity was presenting to an area meeting of the Rotary Club and asked if Kim would tell our story to bring the presentation to life.

What was mentioned was that there would be over 800 people in the audience, a daunting number. I’m very proud of Kim, not that she did such a terrifying thing but apparently was absolutely brilliant. She had lots of really positive comments from the Rotarians who really got behind the charity after Kim’s presentation. 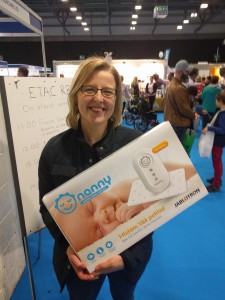 Things you never thought you’d end up doing on your day off number 63.

We attended an exhibition in Coventry with every type of disability equipment for children you can imagine, and a lot more besides.

It was a useful day and we saw some people we know (it’s a small world) and we purchased a new breathing monitor for Toby as the one we have been using is designed for far smaller babies.

We chatted to the salesman, understood how it worked, walked to a cash machine and withdrew the money to pay for it. You enabled us to do that.

Toby’s Trust and all the money very generously donated by so many of you means that we never have to think ‘can we afford that’ when we’re looking at a bit of kit for Toby. Your kindness means that we can get the things Toby needs to make his and our lives better, easier and safer. Thank you.

And on that note I need to list out all the things going on at the moment which Toby’s Trust will benefit from.

We set up the trust as a few family members and close friends felt so helpless and that giving some money felt like the only thing they could do, we’ve never asked for money and yet every day someone seems to contact us to offer to help or to do something for sponsorship for our little boy, it’s the most incredible and humbling experience we’ve ever had. We sincerely hope that as well as helping Toby to have a better life we can one day do the same for another child and family in our situation.

We can’t thank you enough, it’s been a tough month for us but your thoughts, words and actions have got us though once again. Thanks.