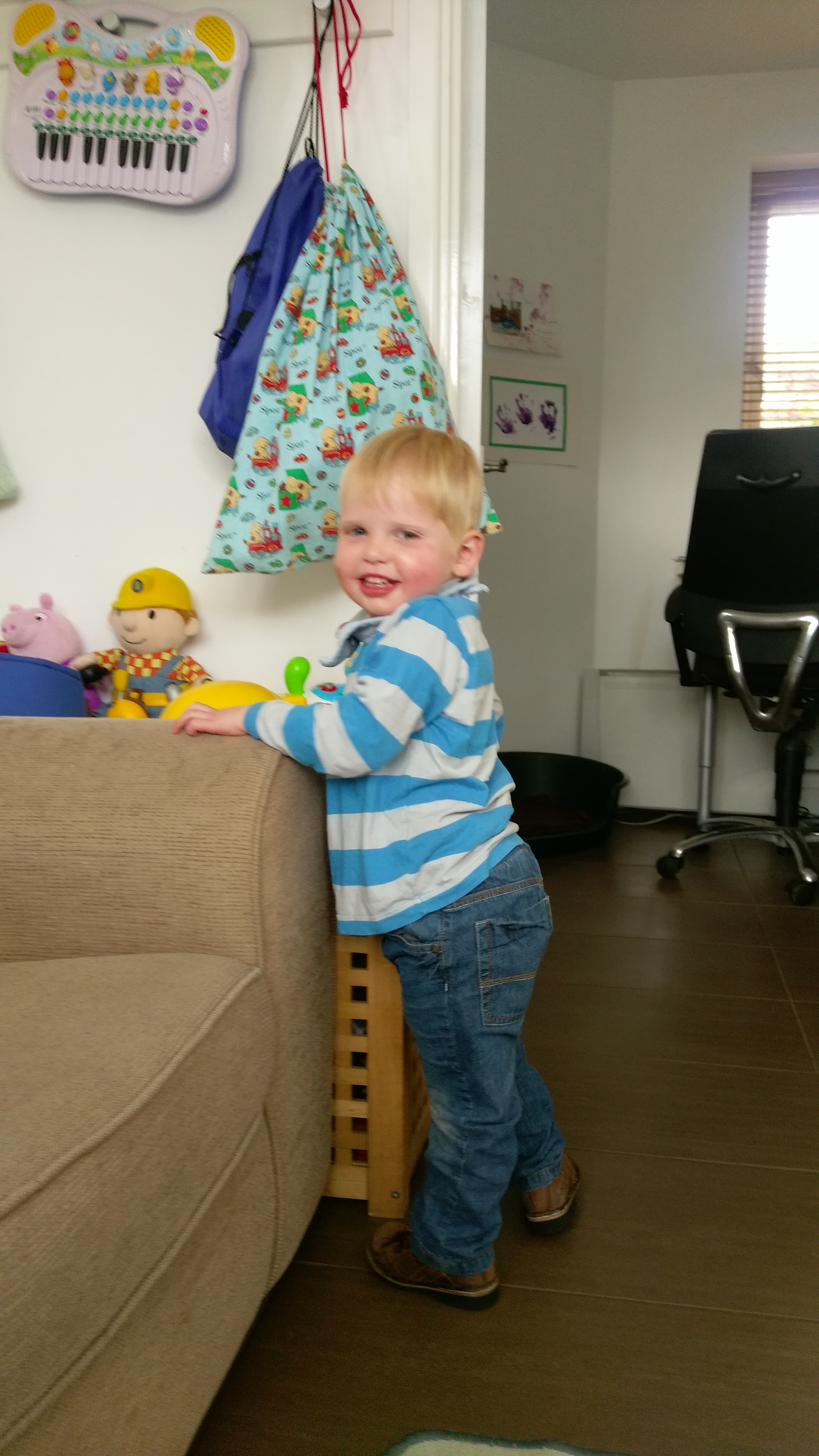 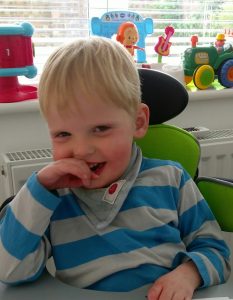 Sorry to say May has been tough for us and rubbish for Toby.

We started May with a trip to Helen House that we were really looking forward to as my Mum & Dad had kindly offered to stay with Toby in the hospice while we had a couple of nights away in nearby Woodstock. When we arrived at Helen House they were having a party to celebrate the ‘Living Wall’ art project which was great but just too much for Toby, within minutes of arriving the excitement, amount of people and noise was too much for him and he was in a fully unconscious tonic clonic seizure and needing oxygen as he was blue.

It was very stressful for all of us as it happened so quickly.

As he lay unconscious on the bed (a status known as ‘postictal’ which is “the altered state of consciousness after an epileptic seizure. It usually lasts around 45 minutes and is characterized by drowsiness, confusion, nausea, hypertension, headache and other disorienting symptoms.” – ‘cos having a seizure isn’t bad enough!) we checked him in with the doctor and got his stuff sorted. The sound of lots of people having fun must have brought Toby round as he was up and about on his unsteady feet within 20 mins and trying to get involved but again it was just too much and before we knew it he was back in a full tonic clonic seizure. 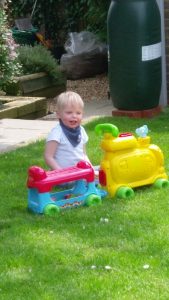 This is very rare and put us on edge, we really didn’t want to leave him but were reassured that my parents were there to look after him so reluctantly we made a move.

Sadly, the seizures had really affected us and we couldn’t properly relax, despite being in a lovely hotel and have a fabulous surprise of a bottle of fizz, cheese and port laid on for us by Kim’s fantastic Geordie girls, thank you ladies! We did manage a nice weekend away but it’s not the same when we knew Toby wasn’t great.

Again, a massive thanks to my Mum and Day (Kay & Mike) for being there, we wouldn’t have left at all if you weren’t there to give him cuddles and comfort, particularly as he had another tonic clonic seizure when we were away. 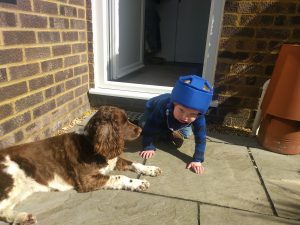 On collecting Toby from Helen House we found out that as well as having another seizure his partial seizures were coming thick and fast.

He has three main types now, the occasional jerk or twitch of his arms, an absence where he goes unconscious for around a second and fully tonic clonic with all his limbs twitching which sometimes he seems fight it and bring himself out of it after only one or two seconds.

A second or so doesn’t sound much but it happens a lot, a few hundred times a day.

Each time he will fall, collapse or just crumple to the ground. We have to make sure he’s wearing his crash helmet as he’s banging his head a lot and often when he come round he’s confused or in pain from a fall and very upset, it’s tragic to watch. Unfortunately the helmet doesn’t help when he falls flat on his face. 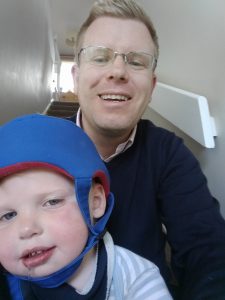 It’s also tough on whoever is ‘on him’ at the time. We used to ensure we always had someone watching him in case he had a seizure, now we have to have someone within catching distance to try and stop him hurting himself.

It’s draining for us all and restricting for him, we can’t let him play on his own in case he falls and really hurts himself. We’ve just ordered rubber matting for the floors to try and give him some protection when he falls.

Sadly this has now become the norm for us, ensuring we’re close by Toby and getting used to him being upset a lot but it is part of life and we have to adjust.

It’s amazing how quickly you adapt to a new normality, we’re used to the fact that he has a tube sticking out of his tummy so we can feed him and use a pump to get his feed into him, friends and neighbours know it’s dinner time as they often see us out walking with Toby in the buggy with his red rucksack which contains his pump and feed.

We’re well versed in drawing up his drugs and mixing his feed, friends were recently shocked to see how many drugs we give Toby morning and night. 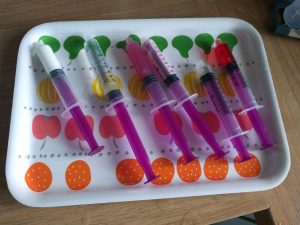 It’s scary how much we become used to things like his drugs, we know they help his seizures (to some degree) but the reality is they’re strong, nasty drugs that impact on other areas:

All those, twice a day. 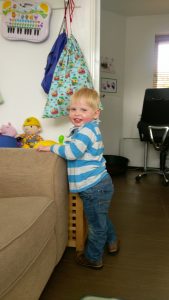 And then we get onto making his feed up, it’s complex and not good when you’re half asleep at 06:30 in the morning. I won’t bore you with the details but if you want to see how much control we have to have over Toby’s day to get all the feeds, drugs and naps in then click here to see a copy of his daily routine. And yes, I know I’m slightly obsessed about writing it all down but we have to, with different carers coming into our house or when he’s left at the hospice everyone needs to know what they need to do and when.

Now this is not normal, our little boy has started SCHOOL!! He’s too ickle!

We’re lucky that Toby has a place at the Redway special needs school in Milton Keynes from September and this term we’re having ‘getting to know you’ sessions for 2 hours each weeks so that the school, Toby, and we can get used to it.

I must say, so far I’m impressed.

Toby’s class teacher Natalie came round to see me and talk to me about the school and then Kim got to meet her too as she was involved in creating the Education, Health and Care Plan which will shape his needs over the coming years.

By the time we first went to the school we felt we had a relationship already which was nice.

The first couple of sessions were good, Toby explored the classroom, found the door, shouted to be let out and played with a few toys, he didn’t notice if I was there or not so on session 4 I was kicked out completely and left to sit in the staff room chewing my nails and wondering if my little boy was ok. Needless to say he was fine and had a great time.

It’s a nursery class and there are kids with differing levels of needs and ability, what’s amazing is how quickly they recognise me as a new face and let me into their little world, it’s lovely. 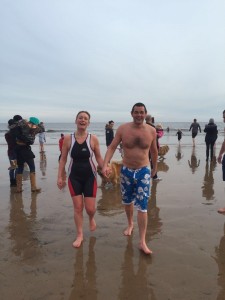 As ever we’re grateful to all of our friends and family who do so much for Toby and for us to give us all as normal and good a life as possible.

Thanks to our respite package we made it out to the pub a few times for a quick drink in the sun (remember that, sunshine?) and bumped into lots of people we know.

And then there are people who do incredible things for sponsorship like Helen and David, they completed a triathlon and raised over £700 for Toby’s Trust.

Also a massive thanks to Andy ‘Sharky’ Cottrell, someone who heard about TT from friends and wanted to do something to help, he’s not even met the little man! Sharky ran his 50th Marathon and in the process raised over £250 for Toby’s Trust. Simply amazing.

And Kim’s friend from work Hollie Napier who ran the Edinburgh half marathon raising a fabulous £585 for Helen & Douglas House!

What’s the money for? 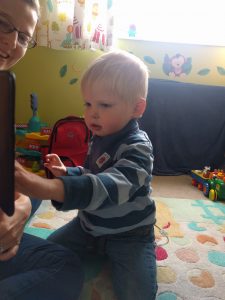 We constantly say thank you to so many people who’ve raised so much money for us, it’s amazing to have a pot of money that we can instantly buy things like foam padding to cover the floor with. We’re now in the process of defining what we need for disabled adaptations, from lifts to new bathrooms and know that Toby’s Trust will be invaluable in creating a future living environment for Toby and us as a family.

It’s also the incidental expenses that the Trust helps us to cover, on Thursday Toby goes in for an operation to change his PEG to a button so he won’t always have a tube sticking out of him, it’s one we can fix ourselves. It’s great that the surgery can be done but it’s in Oxford and there isn’t accommodation available so the Trust helps us book a cheap room by the hospital to be close to our little lad while he recovers from his surgery. 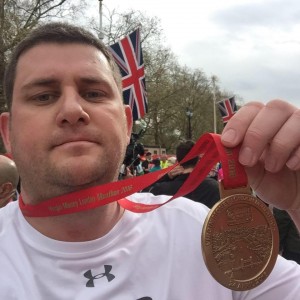 For Rob Jordan running the London Marathon isn’t enough so he’s putting on an evening of comedy, music and an auction for some frankly amazing items. All the proceeds are being split between Toby’s Trust and the fabulous William Crook’s Bright Future Fund, a local family that we’ve got to know well who do astonishing things to raise money in their son’s name for Great Ormond Street Hospital.

If you’re local, free on Saturday and are quick there might be a ticket left for you, get in touch with Rob and he’ll let you know.

Thanks so much to Rob and everyone else involved in organising such a fabulous night.