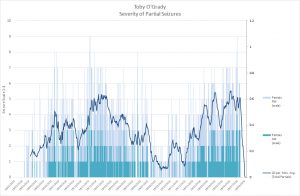 I hate starting these updates with ‘it’s been a tough month’ as it feels very repetitive but I guess that’s the nature of a condition like Dravet, it changes all the time and very rarely for the better.

During one antenatal class I remember a soon to be second time Dad saying the birth of a child was a great test of Excel skills as you’ll soon be recording feeds, bowel movements, sleeps and a whole lot more to boot. Little did I realise just how much data I could collect on little Tobes and what it would morph into. On a daily basis we record seizure activity (I even built an app to make it easier to record) drugs, weight, sleep and all sorts of other things. The thick blue line on the graph is an indicator of seizure activity on a daily basis. It’s been a tough five months. We used to get hours and sometimes days without any seizures, now we’re lucky if it’s half an hour without one.

Since Christmas Toby’s daily seizure activity have been increasing in frequency and duration and the seizures have changed type. He has less of his arm or lip twitching and more absence seizures where he goes unconscious for a few seconds and then comes round oblivious of what’s just happened. That sound quite harmless but if he’s standing up it means he collapses onto the floor like a rag doll, often falling on his head or face. He also now goes into ‘mini’ fully convulsive seizures (tonic clonics) where his arms and legs shake, his eyes roll into his head and his breathing becomes ragged but then after, 3, 5, 15 or sometimes 30 seconds he pulls himself out of it, often crying and upset, suggesting they hurt.

On a bad day he can have one of these every minute, sometimes these clusters last for hours. 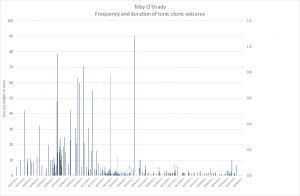 For us these ‘mini’ seizures are doubly bad, they start in the same way as a prolonged seizure so you never know if it’s going to last seconds, minutes or even hours. Over the last few weeks he’s now had two prolonged seizures, 10 and 7 mins long which are the longest he’s had since he was in the coma last year.

Every time he has a small seizure you have to treat it like a big one and think ‘Where is the oxygen? Where am I going to lie him down where he is safe? Can I get him into a recovery position? Where is the rescue kit with the medications? Shall I call an ambulance? Where’s the nearest phone? Am I timing this seizure?’ all that, up to 100 times a day.

It’s exhausting for whoever is looking after Toby and for him, his poor little brain doesn’t get a break. 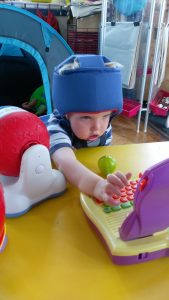 As we have seen Toby’s condition get progressively worse over the last 5 months we have been desperate to try and do something to help Toby so asked our neurologist in Oxford to speak to Professor Cross in GOSH to see if there if there was anything else to try.

They have prescribed a new drug called Perampanel, not many people have trialled this drug let alone taken it so we don’t think it will be a miracle cure but it might just help to give Toby a little bit of a break.

Toby is now fully weaned off the ketogenic diet as it didn’t appear to be the miracle cure it is for some, in fact Prof Cross in GOSH believed the only impact, the reduction in duration of seizures, was more down to an increase in one of his drugs than the high fat diet. It’s great that we can now easily encourage Toby to eat anything whilst maintaining his nutritional content through the ‘mini button’ straight into his stomach. There is a supplement being tested that helps the body produce ketones without being on the diet, as Toby isn’t 3 yet he can’t be in the trial but we’re keeping abreast of it to see if it’s worth considering in the future. 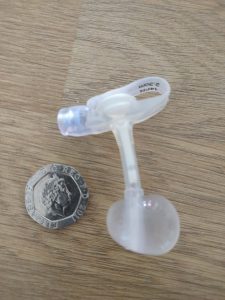 Excitement is a major trigger for Toby and we have to be careful with what we let him do, he’s getting better in the bath and it really is the most fun that little boy can have so we decided to be brave and take him swimming at the Redway School where we’ve been attending for the last couple of months before he goes in September for 3 half days a week.

It was going well (well, for us that is; 15 seizures in 30 mins but all short and not needing intervention) until the end of the session, I wrapped him in the towel and picked him up, as I lowered him to the floor I felt something stretch and ping! I assumed it was the elastic draw cord in his trunks but….I’d managed to pull his button out of his tummy!

The button has a ‘balloon’ that is filled with water and sits inside his tummy, the hole through the stomach lining and his skin is wide enough for the tube part of it which leads to the external cap which we connect his feed to. So I managed to pull that balloon through a hole about 4mm wide.

Considering how much it must have hurt pulling that big balloon through his skin Toby was remarkably good, fortunately Nana was there to comfort him and his teacher Natalie was brilliant at calming me down and got the staff nurses involved and eventually a new button was inserted and the balloon blown up, the safe way. As you can tell, I’ve not quite recovered! 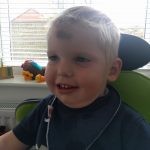 As well as a disaster with his button I also took my eyes off Toby for a few seconds while he was kneeling on the kitchen floor, cue a small seizure which saw him literally smash his forehead into the floor tiles, two and a bit weeks later the egg is still there but the bruising and black eyes are nearly gone.

It’s a wonder Kim ever leaves me alone with him! (I suspect poor quality Daddy Day Care is the real reason behind the foam tiles in the play room, it’s to protect from incompetence!) 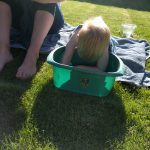 As Toby is so much better in the bath and was (relatively, for us) ok in the swimming pool we’ve tried water play in the garden a couple of times on the hot days we’ve had. This consists of a washing up bowl with a millimetre of warm water in the bottom. He loves it! Unfortunately it’s usually too much for him and it takes him into a fully convulsive seizure that wipes him out for an hour or so afterwards. we want him to have as much fun as possible in life but it’s hard when you know the consequences.

It’s so not fair that a simple bit of splashing on a hot day can lead to a medical emergency and a long recovery. 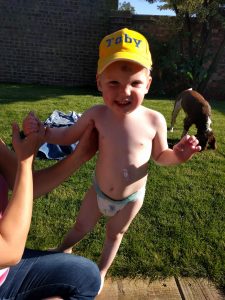 The really strange thing about Toby’s seizures are that some things can definitely reduce them, not drugs, not diet but temporary solutions. When we feed him we need him to keep still and often strap him into his chair and let him watch Peppa Pig or Bob the Builder, it’s amazing the impact on his little brain as he can go from lots to virtually no seizures, the washing machine has the same effect.

Sitting watching the washing going round and round has a soporific effect on him and he can go from having seizures every minute to nothing for a couple of hours, yes, he really does sit for a whole cycle!

It’s great that his little brain and body (and whoever is caring for him) get a break but then you start thinking you’re a bad parent, you should be trying to stimulate him, give him input to help him grow. It’s tough, there isn’t a right answer and every child with special needs is unique.

Having these thoughts and feelings isn’t uncommon, I often feel like I’m marking time with Toby and I just get through the day and then I’m so pleased when the relative ‘safety’ of bedtime arrives but how has it been for him? Has he enjoyed the day? Did he want to do anything else? It’s so hard to tell.

This is another tough side of Dravet, seeing our gorgeous little boy physically growing up but going through so much and getting further and further behind in his development. 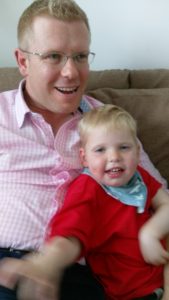 As ever we’re grateful to everyone who supports us on a daily basis, friend with messages, family for looking after Toby and Brady, and the care team we have in place who do a fab job of looking after and loving our little boy like we do.

There’s also those people that go out of their way to do things for us, an ex-colleague of mine Sheila ran a quiz night with proceeds to Toby’s Trust and the Olney & Newport Pagnel LION’s who have given us another very generous cheque from their local fund raising.

These gestures are incredible and make us feel very humble, they’re also increasingly important. We are going through the process of designing disabled adaptations for the (near) future and creating space for a lift and disabled bathroom is looking expensive so to everyone who has donated to Toby’s Trust a massive thank you as you have made, and will make the process of doing it a lot easier.