It’s been an emotional month as there’s been lots of reminders that Toby is different, from spending his birthday in hospital, not going to friends’ birthday parties and an appointment to discuss his first wheelchair. Add in a higher than average number of seizures causing Toby to fall, knock himself and bash his face it’s been a tough month for all of us. 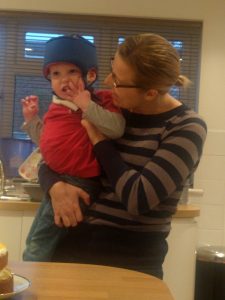 Being November the big news is that Toby is 3! Where did those years go? Feels like only last week a small bundle of screaming Toby came into the world and we entered the world of sleep deprivation, nappy examination and feed schedules.

Crowds of people can overawe Toby so parties, either his own or friends his own age aren’t really a great idea. Now that he’s getting older and the gap between him and his peers is widening it’s even harder for him to join in as he’s not up on his feet and running around like others.

He isn’t bothered by new things and is ‘sensory defensive’, he doesn’t like touching things so ripping open wrapping paper does nothing for him. Toby doesn’t eat, so jelly, ice cream and cake are also out.

It’s quite crushing to see such normal, natural things that every child should enjoy become an issue. As you can see from the second picture, the candles on the cake triggered a seizure, so not fair. 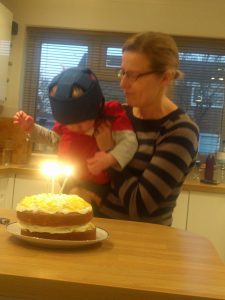 So as always, the family all worked around what’s best for Toby with everyone coming to us and bringing him thoughtful gifts and eat cake on his behalf.

He also got a lovely interactive dog from the team at Great Ormond Street. 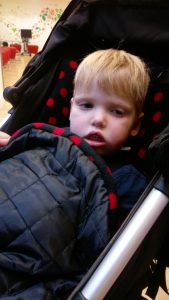 On Toby’s actual birthday we had an appointment with Professor Helen Cross, for our regular 6 month appointment and to enrol Toby on his first clinical trial, the first of many we suspect.

Driving into central London is never fun but fortunately our appointment was changed at the last minute from 9am to noon. Due to the unpredictable M1 we were early so had a long wait, fortunately in a quieter research facility at GOSH with a small playroom which gave Tobes the opportunity to have a crawl around.

The meeting with Prof. Cross went well and we have a good plan laid out for the next few months of different things to try Toby with to see if we can reduce the amount of seizures he’s having.

The first is a tolerance trial of a yoghurt drink which mimics the effect of the ketogenic diet. It’s a 12 week trial to see if Toby reacts ok to it, a side effect might be an impact on seizures. A week in and we’ve not seen anything yet but it’s early days and we’ve not got to the full dose yet.

After this there are a couple of drug trials we could enrol on. Sadly the reality is that everything is a trial, we’ve tried all the known drugs and are just waiting for the new ones to be developed with hope that it helps our little boy.

While we were at GOSH we were asked if we would consent to Toby taking part in a long term genetics study, after learning more we agreed and he had a skin biopsy to take tissue samples that can be used to grow stem and nerve cells to test new drugs on. I can just imagine a little dish full of Toby with floppy blonde hair!

All through the day Toby was good as gold, considering he’d been strapped in his car seat, buggy and then confined in small room for three hours, pinned down and lumps taken out of him. He’s a little trooper and we’re very proud of him. 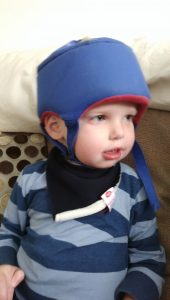 Toby is having seizures so often (every minute or so during bad phases in the day) that he needs to wear his protective helmet all the time. Whatever he is doing he just collapses, often head or face first so protection is essential.

We’ve been waiting for months for a specially designed helmet that was meant to provide more protection but sadly it’s too small and uncomfortable and the design isn’t as good as we hoped so it really isn’t fit for purpose. It’s sad as we’ve pinned hopes on this for ages.

The other bit of kit we went to look at is wheelchairs. Ok, they are more special needs buggy than wheelchair but they are very much ‘different’ bits of kit. One thing that struck us is the weight, coming in over 16kg for a ‘buggy’ is a lot and makes getting it in and out of the car difficult so we’re away to look at what other options are available.

As well as being forays into a new world of special needs equipment it’s a stark reminder of Toby’s disability and that it isn’t going to go away, just get harder as he gets bigger. 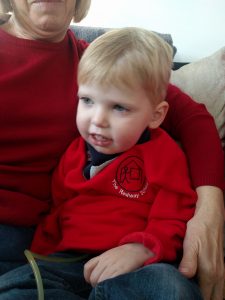 Kim had a really good chat with Toby’s teacher about his posture and lack of walking, Natalie talked to the school physio who came and saw Toby that day to see how she could help.

The first thing she noticed is that he has one leg longer than the other which isn’t going to be helping with walking and standing, she’s going to refer him for further tests to see if there’s something more serious that needs looking into.

It shows that the staff at the Redway school really care about their kids and do everything they can to look after them. 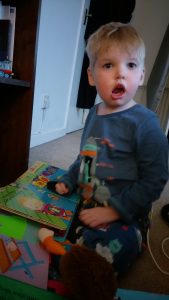 For some time now we’ve been working with a local architect on plans to adapt our house. Over the summer when Toby was particularly bad it showed us how important a lift, disabled bathroom and hoist are going to be so galvanised us into action.

In principle we get a grant to cover these adaptions but literally don’t have the space to put them in so have agreed that we will create the space by extending the house.

Our plan is to create a lift space in the porch and upstairs a bedroom with lift, hoist and accessible bathroom off it and while knocking the house around wasn’t on our agenda it’s the only option we have. Due to the space we need to create the only logical place to do this is at the front of the house, somewhere planning officers aren’t keen on people extending houses usually.

The planning application is going in this week and we have lots of support from people around us so hopefully it will get the go ahead. 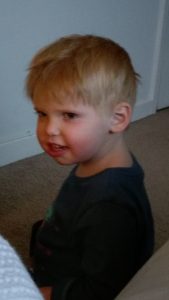 Toby’s seizures have continued on a downward spiral, during good spells in the day he has one every 10-20 mins, when it’s bad it’s every 60 seconds or less, sometimes he’s in a continual state of seizure for 15-20mins at a time.

Seizures are lasting from 2-30 seconds which doesn’t sound a lot but the impact on Toby’s body and brain is huge, he wakes up on the floor with his face hurting, lips bleeding and even tooth chipped; dozens of times a day. The seizures are tiring and it shows, he’s often tired and lethargic. 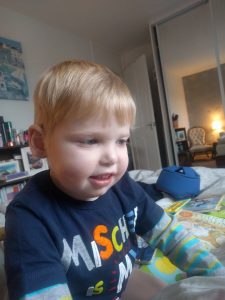 We’ve had a lot of help and support this month from our family on top of the usual day to day help we get from our parents and carers.

Kim’s family came down before Toby’s birthday and brought lots of presents which was lovely and they were all so generous with their words and actions, we’re very lucky.

You may remember Rob who ran the marathon for Toby earlier in the year, his daughter Emilie was watching the Great Ormond Street DIY SOS episode which featured the amazing Claire and Justin who Rob also ran for, Emilie wanted to know more about Toby so came round the next day with a lovely teddy for Toby.

It’s always nice to have people come and see Toby at home as he’s often on his best form and can get the most out of being around people. We’re always walking around town and so many people know Toby, us, his grandparents and carers (in that order!) and the perception is of a little boy in a buggy, people don’t realise he’s as mobile as he is and how much he loves his noisy books and toys.

As with every month, we couldn’t do it without the support of Toby’s grandparents. Their daily support really helps us to keep going and their love for Toby is so wonderful to see.

Thank you all so much for your continued support, I can’t tell you how much it means to us. Those that are far away, don’t underestimate how a kind word or thought on Facebook can make someone feel, it’s great know so many people think of us all.