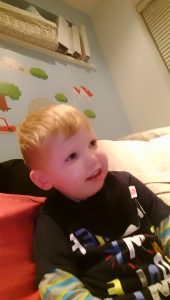 Never good to start with an apology but it turns out people do read these updates and noticed the glaring fact that I didn’t write one at the end of December, sorry!

No excuses, life ran away with us and before I know it the tree was down, decorations packed away, the scales were complaining that I was too heavy and we were all back to work and school and too busy to think.

So, how was December? Sadly not great.

At the end of November Toby started a trial of ‘Betashot’ – a type of fat used in the ketogenic diet made palatable for consumption with strawberry flavouring which the manufacturers hoped would mimic the effects of the diet without having to be as careful about eating zero sugar and carbohydrate, which would be fed to him via his gastrostomy.

As the betashot is high in fat the Great Ormond St dietician wanted us to revert from blending real food and give Toby just paediasure, a nutritionally complete milk, so that we could carefully control his calorie intake. 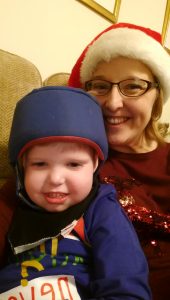 Almost immediately we saw his seizures worsen. As is often the case, we’re unsure if it was the Betashot that caused them to worsen or the impact of increasing the paediasure and removing the ‘real food from his diet. Once fully back on the ‘milk’ Toby’s bowel movements became far less frequent, he needed a drug to get him to go each day and the contents of his nappy went from being solid and firm to watery splats. I think this contributed to the degradation of seizures as he must have felt rubbish.

We agreed to stick to the trial until late January when we decided it was time to take him off it in order to see whether removing the Betashot has a positive impact or not.

One of the key reasons for deciding to quit was that more of Toby’s seizures were needing intervention. He was having longer seizures and needing rescued medication (midazolam) more often and on several occasions needed resuscitation to start his breathing again.

Sadly on one occasion he was with my parents and went into a seizure, they did everything right but still he was going blue and his chest wasn’t rising or falling, his diaphragm had frozen as part of the seizure. 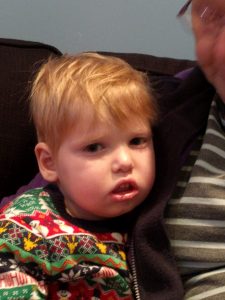 Luckily Mum noticed and did something no grandparent should ever have to do, she clamped Toby’s nose and gave him rescue breaths, the kiss of life, resuscitation, call it what you will it’s a truly terrifying experience for anyone to have to think and act so quickly and understandably they were both shaken after it. We’re incredibly grateful for how far they will go for Toby. It’s a great to ask of anyone, especially your parents.

On another occasion Laura, who looks after Toby and sometimes collects him from school for us, had to pull over at the side of the road, administer oxygen and give rescue mediation in the car as he was having a long seizure, she had to call Kim to come and help her as Toby was out of it after the seizure and the meds, and Laura was understandably upset.

It’s always a real kick when something as normal as playing at grandparents or getting home from school turns into a risky and scary event. 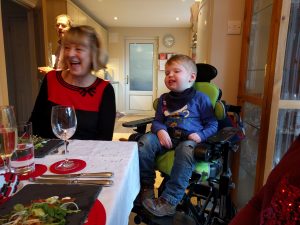 The run up to Christmas for us was overshadowed by the news that Jake, a four year old with Dravet Syndrome died. He’d gone to see Santa with his brother and sister and gone to bed excited and didn’t wake up. Our hearts we’re breaking when we heard the news and will continue to think of Jake often. Sadly we also know of another little boy, George, who lost his fight with Dravet a couple of weeks ago, it’s a reality check of what we’re dealing with.

Christmas day itself was nice and fairly chilled, the family were over at Mum & Dad’s, with the exception of Toby’s Aunty Karen, who was in stunning New Zealand and Uncle Chris, who’d gone to equally beautiful Scotland. As Toby was in a familiar place with familiar people he coped pretty well. I say coped well, he gave us a lovely Christmas present in the morning by having a massive poo in the bath and was then sick on the Christmas morning walk about as far from home as could be, but apart from that it was all ok!

The Christmas break was nice but we often find it gets very repetitive, we get up, administer Toby’s drugs, we feed him and read books or watch Mr Tumble in bed then go for a walk with the dog, a little play then it’s time for the next feed and then a nap. When Toby wakes up we’ll feed him and go for a walk, do his drugs, watch a bit of telly, more food then bed.

It works for all of us in that we can get stuff done, Toby isn’t stressed by new places or experiences and it’s just easier but it often feels like life is passing by and we’re not doing much, days blend into one another and weekends are all very similar.

We’ve vowed to take him to the zoo this year. Who knows whether he will notice the animals, but he’ll probably crack a smile at mummy’s impression of a monkey. She also does a mean impersonation of a parrot, by the way. The reality is it’s easier to stay at home but it’s important for us to keep pushing ourselves. It could well end up in a stressful day but equally we could all love it and feel immensely proud of ourselves having dabbled our toe in the world of family days out. 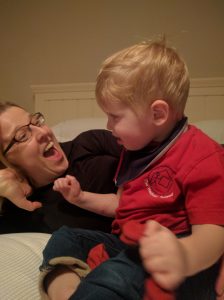 As life can be so repetitive it’s nice to have little opportunities to do things differently. We get help on a Thursday evening so get to pop to the pub for a couple of hours, it’s great to spend time with each other and catch up on the working week without having to worry about Toby. We often say we’re lucky as we get more time like this than most parents who’s kids haven’t got special needs so we try to make the most of it.

Likewise when a friend gets in touch on a Friday afternoon to see if I fancy a pint it’s a big thing and breaks the routine with something spontaneous, thanks Rob!

Back to blended diet

Since we’ve stopped the Betashot we’ve reintroduced some blended food and already we’ve seen a big impact on his bowels, it’s got to be better for him and definitely is for whoever is changing his nappy! Fingers crossed he’ll feel brighter as a result. 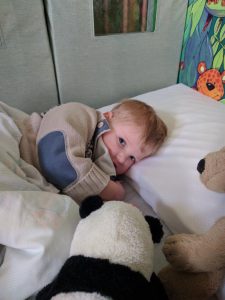 The next big thing we have going on is that we’ve submitted a planning application to put an extension on the front of our house to create full disabled access, a lift, wet room and specialist bed and bathroom for Toby.

We’ve been incredibly lucky with a huge amount of support from all our neighbours, friends, professionals and even the town council have got behind us so fingers crossed it will get granted.

Thanks to your incredible generosity, the funds raised for Toby’s Trust and a grant given to us from the council we hope we will have sufficient funds to build the extension and install the equipment Toby and his carers need to stay in our home and reduce the impact on our backs.

There’s a fair bit going on with Tobes over the coming months so we’ll have plenty to put in monthly updates!

Thanks as ever for reading and keeping in touch, really can’t begin to describe how much it means to us all.