I’ll be the first to admit that last month was a little doom and gloom so having a positive start to March was what we all needed. 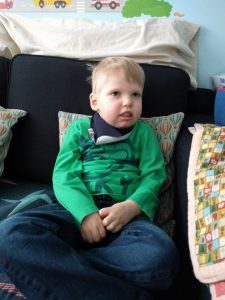 My cousin and family came for the weekend and we were a little nervous, Tobes hadn’t been on good form and maybe a couple of kids doing what kids do wouldn’t be good for him, we couldn’t have been more wrong. After a walk to the park we had to take shelter from the rain in a pub (are there any other places in which to take shelter??) with drinks and crisps all round with bags open in the middle of the table. Toby was being good and following Charlie and Lexie’s lead by playing on my phone on my lap, as normal when I took a crisp I offered it to Toby first and was amazed when he took it, and the next, and the next for best part of half a packet! The first food he’s had in over a year. He normally pushes any food away from him, he hates anything near his mouth and yet he was nearly taking my fingers off to get the crisps in. It could have been the salty taste, watching his cousins or something else but it was a massive moment for us.

For the next few days he continued to eat a few nibbles but sadly it then dried up again, we’ll keep trying and one day…who knows! 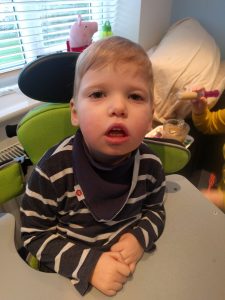 I picked Toby up from school one afternoon and was lucky to find the whole class up and doing an activity together, they were sitting around the low table together indulging in some sensory play with sawdust.

When I’d arrived Toby was facing the door on the opposite side of the table and was sitting in a normal chair (turned out he was strapped in but very discreetly) and playing with the sawdust by throwing it all over the floor, such an uplifting sight from the child who doesn’t like new senses on his hands.

He looked so grown up and it was really moving to see him like that.

We’re really pleased that Toby hasn’t just settled but seems to be really enjoying school, he gets excited when we gets there, does lots of fun stuff, clearly loves all the staff and is absolutely exhausted by Friday! 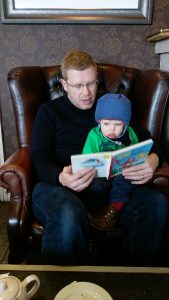 We’ve been lucky this month that we had an overnight break with our respite team looking after Toby, from Grandparents to nurses and carers which gave us the time to get into London to celebrate one of Kim’s school friends 40th birthdays.

Like any other parent a night away is very precious and it means a lot to us to know that Toby is in very safe, capable hands while we are off enjoying ourselves.

This was shortly followed by a night in ‘Bill the caravan’ for Kim and her sister who enjoyed a good catch up and a delicious steak on a stone, and then we were off to the seaside for a family holiday. 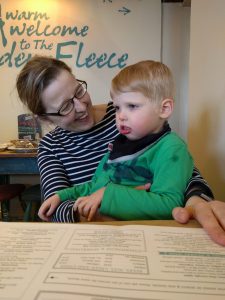 Last spring we had an apartment in Well-next-the-sea which was beautiful and perfectly configured for us and Toby, from open plan living to a lift in case of seizures and needing to get him to the flat. It also has a superb view over the estuary so gives us plenty to look at, even if the weather is a little naff.

When we were feeling low in February we booked the same apartment, sadly we had to wait longer than we wanted to get it but the weekend rolled around and off to Norfolk we went.

From walks on the beach to visits to the café and even an hour and a half in a pub Toby was on great form and really well behaved.

It’s always difficult knowing how Toby will be in confined spaces, sometimes he’s pretty chilled and happy to play on a phone but sometimes he wants to explore and move around. People see a big three year old that isn’t walking which can be a pain in busy places but don’t realise he’s mentally only around six months and like a little baby in developmental terms.

Saying that, the staff in the pub were lovely, as was the beer and pizza, and let him have a scoot around and had a bit of a chat so if you’re ever in Wells and want a pint, head to the Golden Fleece. We had such a good time we’ve booked again for a week in. 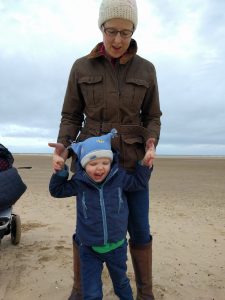 Toby’s daily partial seizures have continued in a familiar pattern of 40-60 per day but worryingly he has developed a new seizure type, a non convulsive seizure.

These do what you’d expect, he’s not jerking like you would see in a normal seizure but you can tell he’s not right as his eyes are fully dilated and flickering just like in a big seizure.

The scary thing is these are lasting from 45-90 minutes and he’s exhausted the following day so it must take a lot out of him.

Our Neurologist has said there’s little we can do to break these seizures as rescue medication doesn’t’ work so we sit there helplessly waiting for him to come round. The only upside is that his breathing and heart rate look ok during these seizures.

At time of writing Toby’s had 8 of these seizures in the last few weeks so they’re becoming part of life but it doesn’t make them any less scary. 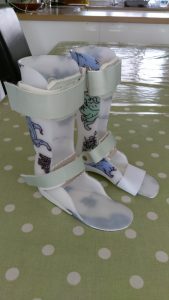 A couple of weeks ago Toby was given the splints that have been made for him, I’ll not lie, they’re not nice. They’ve tried to make them personalised with dinosaur stickers but they are still quite an eyesore.

Toby has to wear them as much as possible to try and help straighten his left foot in particular but he’s still very much getting used to them. Due to the splints (AFO’s is the correct term, Ankle and Foot Othotic) being quite large we’ve had to buy big shoes to go over them so he does look a little odd with massive feet, he’s a size 6 and his shoes are a 9, it’s a bit like clown feet!

I’m sure we’ll get used to them but it’s just another one of those little things that point to Toby being different. 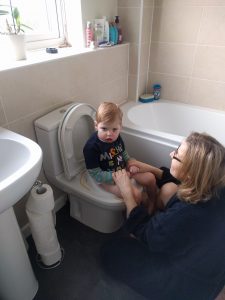 I know you probably don’t want to see a picture of Toby on the toilet but it’s a big thing for us, he’s starting going to the loo!

We’ve had a run of about 5 days so far with no dirty nappies which is so rewarding, knowing that sticking to the blended real food diet is helping him be this little bit of normal and healthy is amazing.

We don’t think he’ll every be toilet trained but this is such a great start and we just hope it continues.

As ever, thanks to every one of you who reads this monthly post, it always amazes me that people take the time out of their busy day to read about our little boy so thank you. 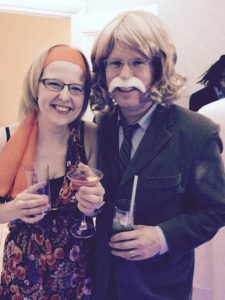 Of course thanks as ever to those generous and thoughtful people who do so much for us, from time looking after Toby to small presents and cards and raising money, if you remember Samantha ran the pancake race in Olney for Toby and raised over £700 which is incredible and will all help with the build of the extension to house the disabled adaptations for Toby.