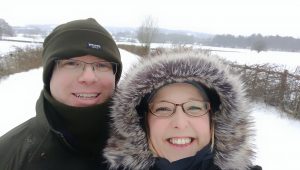 March started in a scary way for us, not the usual seizures but the ‘Beast from the East’ which made a trip to Helen House and beyond a little stressful.

Getting to Oxford was ok, just, and we checked Toby in and headed off as quick as possible for the short 30miles to our cottage in the Cotswolds, three and a half hours later we finally made it after some scary moments up and down hills.

Tobes had a great time in Helen House and the guys looking after him were amazed to see the difference in him. Last time we were there we had just begun a wean of Sodium Valproate and had added in an over the counter dose of magnesium and calcium which we’d read could help with seizures. 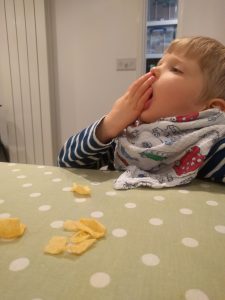 Whilst he was in HH he ate some bits and hardly wore his helmet as he had so few drop seizures, a massive change from just before Christmas and it was so nice to see the staff so positive about it and Toby clearly happy to be there enjoying himself. Obviously he did fall and bust his nose open a bit but that’s just being a little boy….isn’t it?

The following week saw us back in GOSH with Prof Cross for a review. It was fairly short (6hr round trip for a 35min apt) and sweet with confirmation that his fully convulsive seizures haven’t changed much in a couple of years but the partial ones had, surprisingly she wasn’t familiar with the magnesium option and worried that Tobes might be overdosing on certain vitamins so ordered a whole suite of blood tests. Fortunately we didn’t have to wait long and a very experienced nurse got loads of blood, very quickly, not something that happens very often!

There was one moment in the conversation that stopped us both in our tracks, when Prof Cross casually said that ‘Toby is at the severe end of the spectrum’ and would be eligible to try a new drug when it became available. We know that Toby’s condition is severe but we just accept him for who and what he is and deal with each day as it comes, to be told that, by a leading professor of rare epilepsy, was a shock.

After much too-ing and fro-ing with the council we’ve agreed a solution for Toby’s transport to school as he’s now eligible, sadly we didn’t think the first offer of a bus pass would have worked for our 4yr old who can’t walk or talk so some adjustments had to be made.

Jaime-Leigh, one of the Teaching Assistants from Toby’s class travels in the taxi with him and makes sure he’s ok, the first few days were pretty stressful as it was all new to Toby, I cursed it by telling her that Toby has never had a seizure on the way to school but sadly he did that day, the stress of strange place and people was too much for his little brain to cope with.

Three weeks in and it’s getting better, he’s more comfortable but there’s still quite a few seizures, fortunately Jaime-Leigh is learning (the hard way!) how to cope with our Tobes. 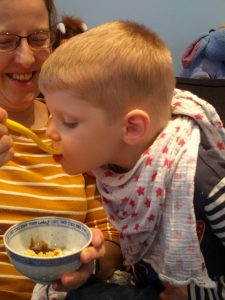 The big news this month is that Tobes has gone from nibbling on the odd crisp to full on eating!!

He’s now eating everything in front of him, with gusto. Crisps and biscuits are still his favourites but salmon, curry, Weetabix, you name it, he’s eating it.

For us this is such a massive thing, to have seen him weaned as a baby and loving his food to then regress so much that he had to have two lots of surgery to fit a feeding tube into his stomach is such a reversal it really does melt our heart to see.

Will it last? Who knows, as with everything we take it one day at a time and enjoy the mess he makes and the enjoyment that it creates, it’s bloody brilliant and we love him all the more for it. 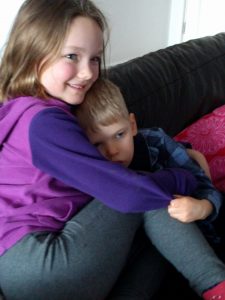 It seems we’re proper lushes as we ended the month as we started it, on Holiday!

This time though it was a full week and Tobes was with us up in the glorious North East seeing all Kim’s school friends, their kids and quite a few of the grandparents and it was reet lush.

We’re always wary of Toby getting overwhelmed, particularly in new surroundings but he coped so well with so many people who just wanted to show how much they loved him, the only seizure all week was on the beach which was to be predicted, pretty dramatic and heartbreaking.

Toby loves being on the beach, as it’s next to the sea, which is made of water, ergo, he needs to crawl to the water and get as deep into it as possible before realising he can’t swim and he actually has his mouth open.

As a result Kim spent a tiring twenty minutes letting him crawl to the waters edge and then carrying  him back up the beach to the furthest point away from the sea. All the while I looked on from ‘Riley’s Fish Shack’ where I’d ordered drinks, just as they arrived I see Kim holding Toby in her arms and running up the beach, it’s clear he’s having a seizure. 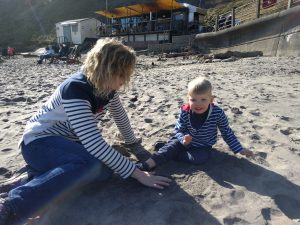 I dash down the ramp and sprint across the sand towards them, channelling my inner Hasselhoff and felt pretty damn heroic.

Until I tripped, fell and face planted on the beach.

In seconds I was back up and running to help Kim get the oxygen on and make sure Toby was safe.

It was only then that Kim noticed my face was covered in sand.

The joys of a Dravet parent!

Needless to say we had an amazing time surrounded by the very best of friends in a lovely place and didn’t really want to come home but as Daddy Pig says, ‘You can’t stay on holiday for ever’.

Over the last month we’ve been trying to give a little back, thanks to our respite care which keeps us going we’re finding the 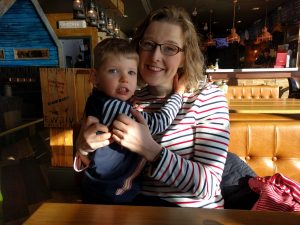 energy to get involved in other projects, I’ve spent time with the nursing team at the hospital looking at how they can help families like us cope better in hospital.

Kim’s spent a couple of days with the senior team at Helen House looking at change and process improvement to help them save money and keep the services going.

Fortunately other people also see how important that hospice is and are raising money to help keep it going, from Matt doing the London Marathon and Dee doing the Liverpool Half to the Big Olney Food Festival naming Helen House as one of this year’s good causes.

We can’t thank everyone enough for their support and fundraising, Helen House means so much to us and I’m sure you can appreciate it’s the same for other families. Thank you.

If you would like to donate to Helen House then you can do so via JustGiving or how about using Amazon Smile? Every time you shop on Amazon you could be donating 0.5% to Helen House (we’re on track to donate about £83,435.85 based on our annual Amazon shopping bill!)