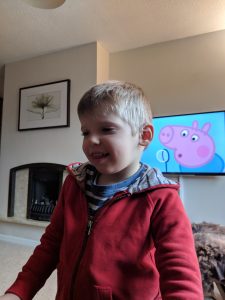 We’ve found February to be a tough month but before that, let’s celebrate the good times. At the beginning of February we took Tobes to Center Parcs for a few days and had a lovely family holiday.

Obviously the main attraction of CP is the ‘Sub Tropical Swimming Paradise’ which is heaven for Toby but a risky place and stressful for us but it’s why we go….

The first day we got up and after a leisurely breakfast headed to the STSP, we know the drill now so push the buggy straight into the changing rooms, ignoring the looks from other parents with small babies who are parking their buggies outside. We get changed and kit Toby up in his swim pants, swim shorts and then long swim costume (looks like a wetsuit but it’s there to protect his knees from getting too grazed on the rough bottom of the pool when he’s crawling in the shallows) and then I go get an attendant to wash down the buggy wheels so we can take it pool side.

He’s strapped in but knows something’s about to happen, something good.

We get to ‘our spot’ just out of the way and tuck the buggy in, lay a towel on it, get the oxygen out, timers ready, rescue kit on standby. We know the likely outcome. 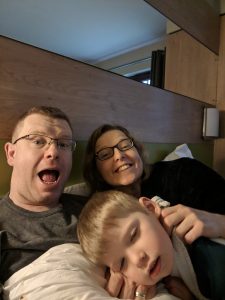 Carrying Toby to the water and we’re in, he’s going crazy and having THE BEST TIME EVER.

All he wants to do is go to the deep end so that’s what we do, holding him so he can ‘swim’ and enjoy himself, albeit with his mouth wide open so he’s swallowing gallons of water.

It is so wonderful to see him enjoying the relative freedom of being in the water, he can kick and splash and express himself in a way that’s not possible normally, but it is extremely stressful for Kim and I to be in a heightened state of alertness at all times, waiting for a seizure to happen, while surrounded by families enjoying themselves.

Amazingly he lasts about 40mins without a seizure so we decide to quit while we’re ahead and get out. We’re very pleased with ourselves.

Carrying a very disgruntled 5yr old to the buggy we sit him on a plastic chair so we can strip the wet costume off him.

And this is where it all starts to go wrong.

Unzipping from the back we realise he’s had a poo and some has escaped the pants and shorts but is contained within the long costume, contained as it, up his back, down the arms and legs.

Panicking slightly as unsure what to do Kim squats down in front of him. 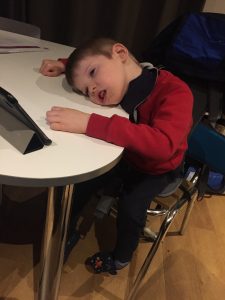 As she turns round to grab a towel her back goes, she’s stuck, squatting in front of a poo covered little boy.

It wasn’t a great moment of clear thinking but I grab Toby and dump him into the buggy, wrapped in one of his towels.

Doing my best not to hurt her I help Kim to her feet and she slowly starts to walk back to the changing rooms, crippled.

Fortunately Center Parcs have a ‘Changing Places’ fully accessible changing room in the STSP so we head for that, I unstrap Tobes and get him standing to strip off the body suit, it’s not pretty, there’s a lot of poo, bits, chunks and a full on log. Sorry but I’m sure wouldn’t want me to miss out any details…

In horror I hose him down with the shower which immediately blocks the drain, there’s now a massive water and pool puddle spreading on the floor so Toby does what any developmentally delayed child would do, he drops to his belly and starts swooshing and swimming in the puddle from hell. He’s in heaven.

In the meantime, Kim’s is barely managing to stand never mind able to help me, so I try to take her swimming costume off as gently as possible, it’s not going well but finally she’s free of the soggy garment and I can get back to the poo monster.

Using my hands, retch, I manage to clear the blockage to get the drain in action and after a liberal dose of antibac handwash I’m back with the shower trying to get wriggle chops poo free. It takes a while. 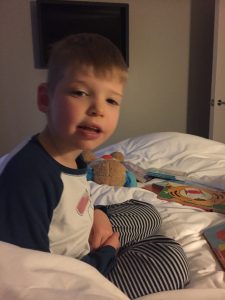 Again, dosing him in as much hand scrub as possible I scrub and clean while my incapacitated wife offers ‘helpful’ suggestions from the side of the room.

After a while he’s deemed disinfected and I manage to wrestle him from the floor, which he really doesn’t want to leave, onto the changing table. I get him dressed and strapped into his buggy.

One down, two to go.

Next it’s Kim’s turn, gently I manage to help her get dressed all the time conscious that any movement is agony, it was like playing that old game ‘operation’ but instead of a buzzer I got a ‘ow’ if I touched her. When done it’s my turn to throw some clothes on and we can leave.

As you can imagine, it wasn’t the most stress free morning of a ‘holiday’.

On the bright side, swimming on day 2 was much less stressful, we enjoyed some nice walks and even lunch out at the Pancake House where Toby was so good it was unbelievable, for a short period we felt very normal, a state we strive for. 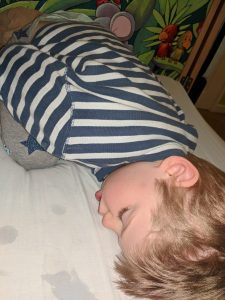 We’re still convinced that the new drug, Potassium Bromide, is helping to reduce his seizures however over the last few weeks he’s now had two prolonged seizures which have really scared us.

Over the last couple of years most have Toby’s seizures have ‘self resolved’ without intervention in under 5mins however at 0545 on a Sunday morning we heard a change in Toby’s breathing on the monitor that didn’t sound right so ran into his room to find him convulsing in bed.

This was different though, the convulsions weren’t as violent and he was a little responsive but there’s no doubting he’s in full seizure, we wait, and wait and eventually decide we have to give the first dose of rescue medication, a syringe of midazolam into his gum that we have to massage in.

We wait, he’s still in seizure but it’s still not as ‘bad’ as normal but definitely not right.

We keep waiting, long passed the time when we should be moving to his sec 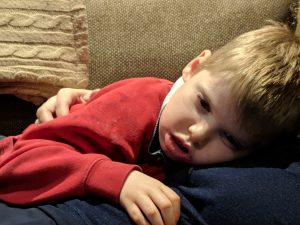 ond rescue medication and calling an ambulance, hoping that the seizure will end but it doesn’t.

I get the landline ready to call an ambulance, something I’ve not done for a long time and Kim  prepares the second set of drugs, paraldehyde. This is the foul smelling one that has to be administered within 10mins of getting into the syringe as it melts it and has to be administered rectally. You can understand why we’re reluctant to give it.

Just before we administer the drug, he’s finally come out of the seizure, 24mins after we’d rushed into his room.

Normally is postictal (unconscious) for 45 minutes after a seizure, but this time it’s different again, instead of going unconscious he’s awake, distressed and clearly in pain and disorientated for a large portion of the day. Watching him like this is just as hard as the seizure itself.

The following Saturday morning we’re woken at 0330 by a change in Toby’s breathing, he’s having a seizure but it’s stopped by the time we get to him.

We return to bed, wired, the adrenalin is pumping so we just lie there and try to drift off to sleep which we eventually do until 0615 when he goes into seizure again.

This one is again less violent than his normal seizures, and long, we reluctantly get the first line of medication and try to administer it but again he’s sort of aware and fighting us off which is almost more traumatic that he knows something isn’t right but his brain just isn’t functioning properly.

Again we give the meds and again it doesn’t feel like it’s worked, this time the seizure ends after 18 mins but again he’s distressed and hurting afterwards.

For the rest of the day we’re like zombies, tired but prepared for whatever happens next. 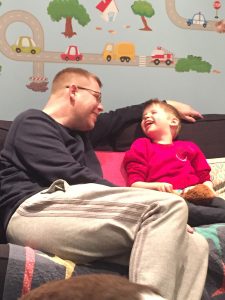 As you can imagine it’s taken weeks for Kim’s back to get back to anything resembling normal, she’s still sore and tender and can’t lift Toby which has a knock on effect to me and we’re both struggling with our physical health.

Couple that with the constant vigilance during the night of always listening for a change in his breathing and always being ready to act, it’s fair to say it’s physically taking its toll.

There’s also the stress of ‘Toby’s wing’, the builders are still on site each day, including weekends which is good that we’re getting close to it being finished but it means the noise, decisions and resolving issues is a constant level of stress on top of what is already a difficult time.

Last week we had the incredibly sad news that a boy with Dravet Syndrome had died, while we didn’t know him personally it’s a very real reminder of how fragile Toby’s life is. This was exacerbated last week when we heard than Jenson, a little boy we’ve known for a few years through Helen House, school and through the LIONS club who supported him and Toby, passed away. Whilst it was a completely different condition to Toby’s it again was a shock and didn’t help our emotional state.

Through Kim’s work we’re both in the process of getting counselling to help us mentally deal with the daily pressures of caring for Toby while trying to work, pay bills and occasionally have some fun.

To up the fun factor, Kim and I have started to go to dance lessons to learn some rock n roll. We’re hoping the exercise and endorphins will do us the world of good.

As ever, we’re so grateful for everyone who supports us in every way, we know that life is tough for everyone and for people to go out of their way to help us makes us feel incredibly lucky, we couldn’t do this without you, thank you.