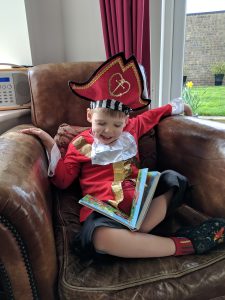 The eagle eyed of you out there will have noticed that there wasn’t an update in March, with the stress of life I just didn’t get chance, apologies.

At the end of March we were having stress with the extension, there were issues with the water in the wet room not draining properly and the underfloor heating not working, to name but a few issues, those stresses are still there and the build is still nowhere near finished. It’s nearly 6 months since it started.

Build projects always run over, I get that but the impact on us is more than just chasing people and battling to get the job done properly. We haven’t had a toilet downstairs for months now, that means carrying an 18kg, uncooperative child up, and down stairs every few hours to make sure he goes to the toilet, it’s hard work.

To make matters more challenging, towards the end of March we had a much needed weekend at Helen House booked, we packed the car, picked Tobes up from school and headed to Oxford. We were just on the outskirts of Oxford when a call came in, on the car display it showed as Helen House and as I answered it my heart began to sink.

They had to cancel our visit. 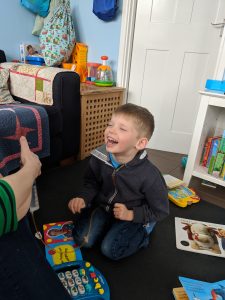 I cannot tell you how crushing that call was for us but we know that they’d only do that if they had no other choice. We were tired, stressed and unwell but we knew that there was a family who needed Helen House’s help more than us, so we had to put it in perspective.

After driving back from Oxford in rush hour traffic, desperately upset we were met at the door by a friend who lives around the corner, she had brought us a meal, snacks and gin in a tin and more importantly, a big hug and a smile. It’s these acts of kindness that help us pick ourselves and keep going when all you want to do is curl up and cry.

The ‘new’ drug, Potassium Bromide, we’ve talked about before is helping Toby a lot, he is having less seizures and we even got to a point where he was seizure free for 23 days. The downside is that  they are getting much longer and changing.

These new seizures are less violent but are lasting between 20-30 minutes, imagine watching, helplessly while your child convulses in front of you for the length of a TV show, it’s horrible. 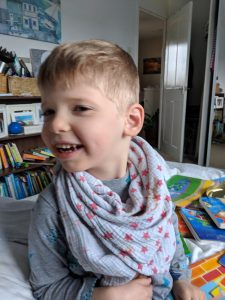 One of these new seizures occurred whilst Kim was at home with Toby, I’d left work (near Nottingham) and was sat in stationary traffic, Kim wanted to talk through what the best options for treatment were, as these new longer seizures had only started happening so we didn’t know what the best course of action was, so she had me on speaker phone while she administered drugs, oxygen and kept talking to him till he came round.

I cannot begin to describe the overwhelming feeling of helplessness and frustration at being hours away from home and not being able to help or do anything practical to aid in Toby’s treatment and recovery.

Toby came home from school with a certificate of achievement a few weeks ago, for ‘engaging with his classmates’. I know that doesn’t sound a lot but it represents a big change in his cognitive ability.

Until recently Toby didn’t ‘see’ other children, he was just happy playing on his own, occasionally looking to an adult to interact with, for him to start looking into other children’s eyes, physically touching them and trying to interact is a really big step for him. 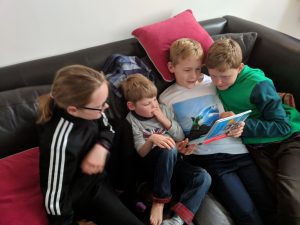 In April we made the pilgrimage to the North East to spend time with Kim’s friends from school, we stayed in a little cottage that’s worked so well for us in the past as it’s so near to everyone.

We had a fantastic time seeing everyone and Toby took his engagement with others a lot further, we were often in houses full of adults and kids and he really wanted to play, join in and be physical with all of them. Some of the younger ones found him a little intimidating as they don’t necessarily understand yet that he’s different but they all tried and it was so lovely to see them interacting with him.

Being around people who ‘get it’ is so important, there’s no judging that we disappear for a sleep (all of us!) in the early afternoon or that Toby has to be strapped into a seat to eat, it’s just the way it is. 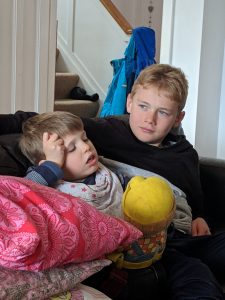 We love our time up there and everyone is so brilliant with Toby but it does often highlight how tiny our world is, a few hours on the beach is a great way of catching up with everyone while the kids play but for Tobes it’s no fun at all, strapped into a buggy in the cold is pretty miserable. If we let him out all he wants to do is crawl into the sea, which is freezing and would certainly cause a seizure. Our friends were very perceptive and cancelled plans for days out in favour of days in the house so that Toby could have his freedom safely and in comfort and we could relax and enjoy ourselves. This meant so much to us as our stress levels were reduced as Toby was happy playing and being looked after by his new friends.

Over the last couple of months Toby’s had so many appointments from dental to dietitian, wheelchair services to neurology and whilst they’re all time consuming and stressful on the whole, all is good.

He’s gaining weight and eating everything put in front of him, his teeth are ok and not needing extraction from the fall last year and he’s going to be getting a new wheelchair soon to replace his special needs buggy as it’s no longer suitable for him. As with everything there’s mixed emotions about this, it’s one more sign that Toby is different but it will be easier for us to get him in and out of and use in vehicles etc. The lease on our Motability car is due towards the end of the year and with the move to a wheelchair a ‘van and ramp’ solution is looking more likely. 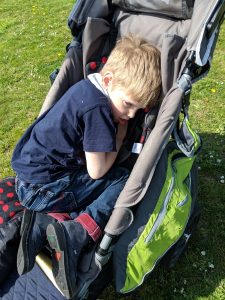 His neurology appointment was good, the Potassium Bromide is still helping and Prof Cross is pleased with the progress, it’s just a hell of trip down to GOSH for an appointment that’s less than 20mins. As ever when we’re there we see lots of other children attending appointments, it’s always the older kids that get to me, we sat next to a family with their sixteen year old son in a wheelchair, he was a big, very smiley lad who reminded me of Toby. I looked at his petite mum who was lovingly talking to her non-verbal and immobile son and wondered how she’d physically coped for 16 years. I can never imagine what it will be like when Toby is older, heavier, harder to move and probably more stubborn. Generally, I put my head in the sand and don’t think about that but when that reality is front of you it’s hard not to think of the future and what it might look like.

We had a lovely time in the North East and were meant to be away for the Easter weekend to see Kim’s sister in their new house but I’ve hurt my ribs so had to cancel. It’s not just the long car journey but being unable to lift Toby meant it would have left all the work to Kim, which is multiplied tenfold when we’re in a new environment. Karen was very understanding and thankfully made it down to see us instead which was lovely and Toby loved having his Aunty reading him bedtime stories. 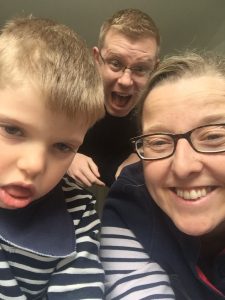 We’re so lucky that Kim’s Mum and my parents are so involved in Toby’s care, they adore each other which is wonderful to see, without them we would not be able to get through most days let alone keep working through the school holidays.

It’s been a tough few months and it’s taking it’s toll physically and mentally on us, the smiles are often only just on the surface, below that we’re knackered. Without the kind words, the messages, the hugs, dinners, treats, watching Toby we wouldn’t be coping at all. Thanks for keeping us afloat.