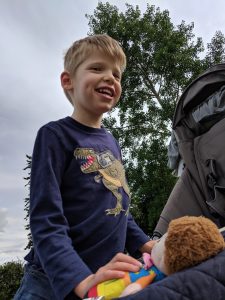 It’s been a busy month for us which is usually the sign of a good spell for Toby and it’s not been too bad, lots of people, variety and love as usual.

The month started with a visit from Karen from Scotland which is always lovely, especially as she brought cheese! We all love cheese in this house and Toby was very happy to get involved. A visit from Karen is especially great as she’s a very knowledgeable pharmacist who gives us tips and ideas, if it wasn’t for her research Toby wouldn’t be on the Potassium Bromide that we feel is helping reduce the amount of seizures he’s having.

The following week was a big one as Toby had Botox. Gotta keep him looking cute for the photos!

It’s been on the cards for a while as his left foot turns almost 90 degrees inwards at the ankle, there’s no bio-mechanical reason for this so the botox is used to selectively ‘switch off’ various muscles in his leg to stop it pulling.

This is a very precise procedure so Toby has to be absolutely still and there’s only one way that’ll happen, general anaesthetic. 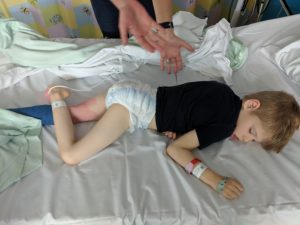 It was a full on admission and operational process for him including the early start and no breakfast but fortunately he was first in. The anaesthetist was lovely (they usually are in our experience) and let us in the room, they didn’t even try to put a canula in his arm as he wouldn’t be still long enough so they used a mask to ‘gas’ him off to sleep, it’s a horrible feeling holding a mask onto your child face until they collapse all floppy onto you.

We were told that the procedure would take about fifteen minutes then he’d be in recovery for about 30mins until he woke up. After an hour and a half and they hadn’t called us we were beginning to worry but it turns out he was just enjoying a very deep sleep.

We took him with his new plaster cast (to keep the leg straight) and bright red antiseptic leg dye back to the ward to sleep it off and got home about 2pm. 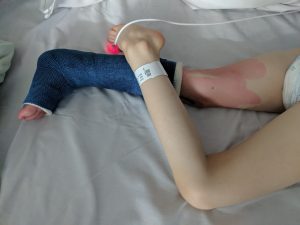 It wasn’t a long day, it wasn’t a taxing day but we were exhausted after it, Mr Tobes was absolutely brilliant and didn’t let the cast worry him, he just got on with life as normal.

He really is a brilliant lesson in not over thinking things, he lives in the moment and that moment is usually a very happy one provided you’re willing to sing and make silly noises.

The cast stayed on for three weeks and when it came off there’s been a slight improvement in the ankle, was it worth it? We’ll see how long it lasts! 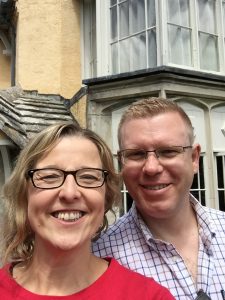 The week after the operation Toby had four nights in Helen House and we had a lovely break in Dorset, even with his cast on he managed to run everyone ragged by the sound of it and had a lovely time.

It’s so good for us to be able to get away and have a few nights without listening to a monitor and being on edge, keeps our heads above water.

As ever we’re surrounded by people who are lovely, be it ‘Carer Claire’ who came to visit Toby (and brought him a gorgeous bottle of gin which ‘he’ loved…) to a random stranger in the street giving Kim £1.50 so she could buy Toby some sweets. Apparently it’s a tradition in Glasgow to give kids some cash, the nice fella said that when his kids were little he’d make a fiver a day pushing them round! 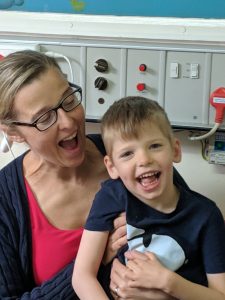 A few weeks ago our friend and pilates teacher Angie interviewed us for a series of podcasts she’s doing under the banner of ‘Cheer on MK’ designed to celebrate people doing good things and to cheer them on, she thought we’d make a good episode and did a fab job of whittling our waffle down to just under an hour.

Lots of people have been in touch with us and Angie and we’re really grateful for the lovely feedback, we just do our best and try to do it with a smile on our faces so thanks for being so thoughtful and kind in all your words and committing your precious time to listen to it. If you fancy a listen you can download it here: https://cheeronmk.podbean.com/?fbclid=IwAR0NQ-FV1n8g5y9y1pc0EztdEBOKbdcJmWKjqy2mWjI1Y1d4ktOd8Y9QbLc

Life with Tobes is never simple so we could do without added complications however last Thursday we got a call from school to say that Toby’s taxi (it’s a wheelchair adapted minibus) had been hit by a car on the way to school. 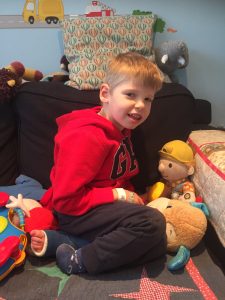 At first it didn’t sound too serious and his teacher was arranging a rescue mission with the school bus to go and get everyone.

However it turned out to be a bit more serious than first thought. A car had ploughed into the back of the stationary taxi at a roundabout and caused damage to the tail lift.

The staff on board were all in shock and suffering from whiplash and when the teacher got there took everyone straight to A&E.

Fortunately due to his wheelchair being so supportive and so strapped in Toby was the only person uninjured, Kim spent a few hours in A&E with him getting checked out but all seemed ok.

The staff at the Redway school are head and shoulders above most when it comes to a crisis, this wasn’t a situation they were used to dealing with but deal with it they did and we can’t thank them all enough for that they did and do for our little boy.

Sending our love to all the ladies on the bus who are still off injured. 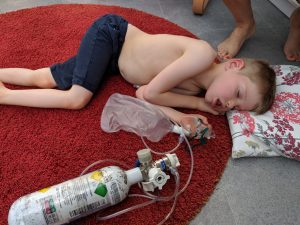 I suspect most people were complaining about just how hot it got over the weekend, for us it’s a scary thing as we know Toby just can’t cope with it, his brain shuts down and into a seizure he goes.

We’d managed to keep all the windows and curtains closed and the house a lot cooler than outside but when we did go out for a family BBQ it was still too much and he had a violent seizure.

It would have been lovely to cool him down in the paddling pool but even that is a serious trigger for him so there are few options when it gets like that other than hide. 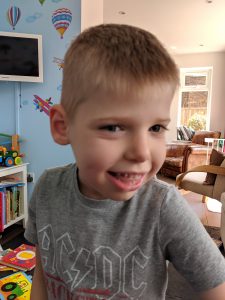 We’ve currently got a car from the Motorbility charity that we use to ferry Toby around in, it’s a three year lease which is due in December so we’ve started thinking about options for the next vehicle.

Reality is that Toby is getting heavier and more awkward to lift into a car seat so we went to the Motability Car Show at the NEC to look at Wheelchair Adapted Vehicles (WAVs) which was an eye opener.

It was great to understand how it all works and we saw a ‘car’ based on a Transit Van that would work well for Toby, just got to decide if it’s the right thing for us all in the longer term now. 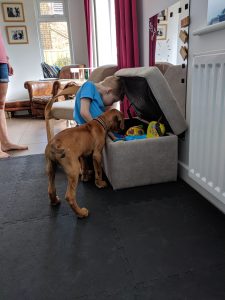 Not a human one and not even ours but my brothers new puppy, Duke the Ridgebacke came to meet Tobes. Considering he was only 10 weeks old he was brilliant and they were firm friends straight away.

Definitely been a busy month, thanks for reading and for everything, as ever.