September was a busy month for all of us and, as ever, a double edged sword of great stuff and some really tough stuff. 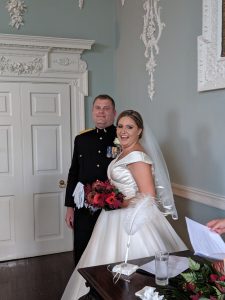 Tobes was back at school and loved seeing all his class mates and the brilliant teaching staff that do so much for all the kids at Redway. He was only in for a day and a half before we whisked him away to Helen House hospice for a few nights so that we could fly to Dublin for my brother Matt and new sister-in-law Trish’s wedding.

It was so great to be able to be with Matt and Trish for their special day and enjoy celebrating such a joyful occasion (with no responsibilities!) with friends and family while Toby was being looked after in the hospice. It really was a fabulous wedding in a stunning venue. Sadly our high didn’t last too long as the morning after the wedding we got a call from Helen House to say Toby had had several seizures which meant they were working their way through his rescue protocol and only had one option left before he would have to be admitted to hospital. It was heart breaking when we’d been having so much fun.

We have been abroad before while Toby was cared for by Helen House and we’ve always said that if something happens we’ll just ‘hop on a plane back as soon as possible’. 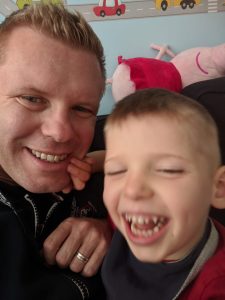 We tried to get home on the Saturday but just couldn’t make it happen so were pretty anxious for the rest of the day, which isn’t great for everyone who has been celebrating a lovely wedding.

By the time we got to Helen House the following day Toby was his usual smiley self, but it had shaken us.

Two weeks later we had the privilege to be at our friends Rachel & Tom’s wedding, this time a little closer to home so had arranged overnight care at home with our usual respite nurses who are great at looking after Toby each week.

Again, we had a brilliant day and again the next morning Tobes had an early morning seizure, which is not usual for him and he wasn’t at all himself, so we altered our plans to dash home to see him.

This is the reality of life with Dravet, no matter how much we plan, how expert the care is that we put in place, something always seems to happen that puts the fear of god in us and ends up us needing us to come home. It’s tough. 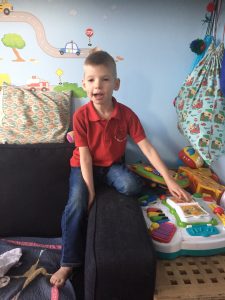 I saw a lot of friends and family this month which has been great for the soul but not so for tiredness levels, especially Kim’s.

I also want to give a big shout out to my parents for helping with Toby while I’ve been away and supporting Kim. They’ve experienced some pretty horrible seizures too. However gorgeous and cheeky Toby is it’s not easy being a grandparent to him with all his complexities. it’s really appreciated.

Our world is a very fine balance with a tight support network of people who love Toby around us supporting us each week. This month Kim’s mum has been poorly which was pretty scary for all of us and it showed us how much we rely on her as part of our network but also how little headroom we have when the balance is tipped. Fortunately Kim’s brother and sister were quick to step in and help support her and us. 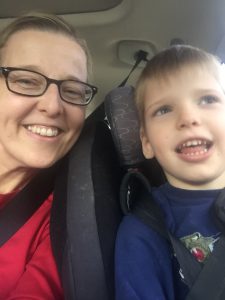 Toby hasn’t been sleeping well over the last few months so is often awake in the middle of the night, whilst it’s great he’s safe in his padded bed he’s discovered that the best thing in the world is pulling the padding off, hearing the Velcro ripping, time after time, at midnight, and 2am and 4am…..you can imagine what that does to you. Lack of sleep and the sound of Velcro is literally torture.

The trouble is, he might have a seizure at any second so there’s no option to turn the monitor off, we just have to lie there listening to the loudest, most horrific noise you can imagine, until he gets bored or starts kicking the bed, at least it’s a change. 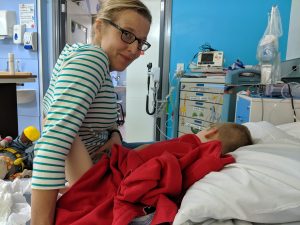 Not only have we seen a large increase in the number and duration of Toby’s ‘big’ seizures but towards the end of the month the number of smaller ones increased too and then we had a very odd Sunday where Toby was just lying in bed, listless all day with his eyes wide open, it continued through the night and then into the Monday. Although Toby doesn’t walk, he’s constantly on the go. He literally never stops moving so for him to be listless was really worrying.

Kim had gone to work as normal but was dead on her feether boss and colleagues insisted she come home to rest and she did just that. We both owe a lot to the businesses and people we work with for being so understanding and flexible, all parents have that ‘I’ve got to go’ moment, we have lots of them and it’s not just Toby, it’s us, we’re often too exhausted to function properly but the people around us help keep us afloat, look out for us and are understanding, it means a lot, all of you, thank you.

I got a call from school as they were worried about how unlike himself Toby was so I went to get him.

In the meantime Kim phoned one of the doctors from Helen House as they know him better than most. There answer, go to hospital. 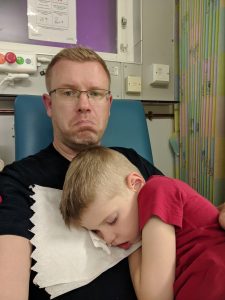 So, despite being exhausted we took him into hospital in MK.

The team in MK were great as usual but Toby is way outside their level of experience and understanding, they did all the checks and tests they could and we established he’d probably been in and out of seizure for 48hrs, not great but not awful either.

They wanted to give stage 3 rescue meds via IV but we refused, saying instead that he was safe, breathing and not to go to far. Fortunately they listened, we had a good conversation and after 8hrs we took him home so we all could rest.

The silver lining to that cloud was that we had a couple of nights at Helen House booked and they called to see how Tobes was doing, on hearing that he wasn’t great they offered us an extra night so we could take him the next day, which we did.

But that’s another month and we’ll pick up there soon. 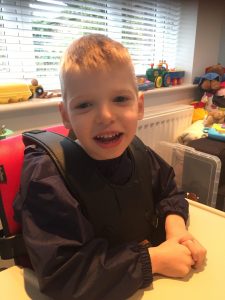 As ever there’s a million people to thank for keeping us afloat but I want to mention two people and their businesses specifically.

Sadly we were away so couldn’t go but she came and met Toby and we had a lovely chat, the BBQ was a massive success and she’s donated over a thousand pounds to Toby’s Trust which is incredibly generous and is going towards a new seizure monitor.

Again we’ve been so fortunate to live in an incredible place where complete strangers quickly become friends and do wonderful things for us, I’m welling up just typing this. 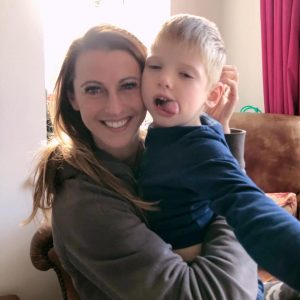 The other event is ‘Hops and Dreams’ a beer festival with a twist that our friend Tim (from Beerfly in Bedford) is putting on, he’s doing an incredible job of the PR and raising awareness and is donating part of the profits to Helen House. As you’ve read already HH have supported us so much in the last month, we can’t do without them so for nice folk like Tim to be raising much needed funds for them is brilliant.

As ever, thanks for reading this, September was brilliant and awful in equal measures but you guys keep us going.