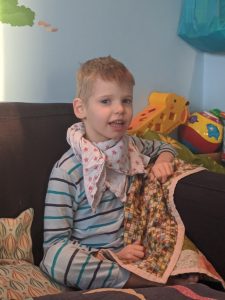 You may recall that we ended September in hospital after a bad day of seizures for Toby, whilst there we had a call from Helen House to see how he was as we had a stay booked with them later that week. After hearing that we were a bit worried they kindly offered for us to come in a day early to spend some time with the Doctors.

So, after a disrupted night’s sleep we packed our bags and headed to Oxford. For the last couple of years we’ve taken the opportunity to ‘escape’ when Tobes is in HH but as it was a last minute admission we stayed in the recently renovated flat and spent a lot more time with the care team which was lovely.

There was a couple of hours spent on the floor while Toby was on the magic carpet chatting to the two doctors on duty. We’ve known Dr Emily for years and she has such an insightful and practical approach to treating Toby, it’s so refreshing to spend quality time with her and get her opinions. We also met a new doctor who we remembered from the early days when she was a registrar in Milton Keynes, she hardly recognised Toby he’s grown so much.

The other advantage of going in a day early was that we got to see our friend Rebecca and her beautiful daughter Neve who also has Dravet, it was really lovely being able to catch up over a bottle (or two) of wine and chat to someone who really understands our world.

We did manage a couple of nights away in a beautiful apartment in the Cotswolds, walking, eating and sleeping, all the things that help us stay afloat. It’s precious time with each and a chance to rest but barely scrapped the surface of our exhaustion.

The following weekend one of our best friends John and his family came to see us. It was the first time Sam and Lauren had met Toby and they were absolutely fabulous with him, clocking straight away that rough and tumble is the way to Toby’s heart. Toby meeting new folk is always a little bit of a worry for us as he rarely engages, and he can be quite physical pulling hair and grabbing, which is particularly hard with younger kids but fortunately Sam and Lauren are made of tough stuff so they were wonderful with him. 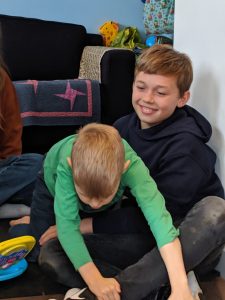 Another highlight of our month was being treated to a fabulous meal at Paris House by our friends Charlotte and Brad. Charlotte has always been wonderfully supportive of us since we met when Toby and Luke were still bumps in tummies, bringing food parcels and thoughtful cards but this was super special, such a lovely treat in the midst of struggling to keep our heads above water. Thanks to Nana and Grandpa for caring for Toby so that we could have enjoy a lovely lunch.

Toby got some lovely gifts this month from his aunty Karen. Some very smart stripy tops, which you will see him sporting in the photos and a custom carved Christmas decoration with his name on it. The tops are particularly good as they’re longer at the back, sadly most kids clothes aren’t designed for little ones who are still crawling and wear nappies, so it’s really difficult to find ones that don’t leave a gap on his back and show is nappy. Well done Aunty Karen.

The rest of October passed in a bit of a blur, Toby was poorly with a cold and due to the fragility of the kids in his school he had to stay at home, which was tough on all of us as he was still very energetic, it was then half term the following week so he had two weeks off school. Arghhhh! 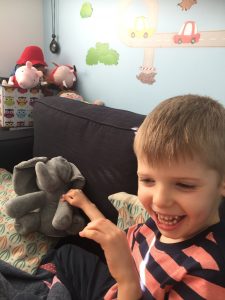 We’ve also both been ill with colds, as has most of the population, and general run down-ness. It’s always that bit harder when we’re both down at the same time, we have no energy to share and go into survival mode to try and get through each day.

Recovering from our colds has not been helped by Toby sleeping really badly, up two or three times a night, doing this awful manic laugh and the ripping of the Velcro off the bed padding, it goes right through us, especially at 3am. However we do have some positive news on the Velcro front, which I’m sure you’re keen to hear after it causing such a steer in last month’s update. With the approval of the Occupational Therapist the padding has been removed. Ha ha Parents 1 – Toby 0.

In October we probably got to the most broken we’ve ever been and have been in full on survival mode. Unfortunately, being in survival mode means we end up cancelling things that we really want to do but know our bodies and heads can’t handle. This month Kim had to cancel her annual trip to Whitley Bay to see her school friends and celebrate the impending nuptials of Katie and Paul. It’s heartbreaking when we miss out on the really fun things in life with people we love. Unfortunately fun often takes a back seat when you are just trying to get through each day, getting up for Toby, walking the dog and going to work and then doing it all again the next day, on even less sleep. 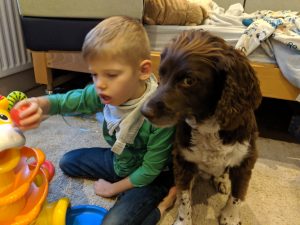 We have asked for some additional respite, four nights worth of overnight care, while we’re in the house to try and help us catch up on some sleep and get through this tough time, disappointingly however it’s been turned down. Thankfully we’ve got some funds from social services that we can use for a few nights, but it’s not a long term solution.

Thank you to everyone who has stuck by us through it all, seeing friends, a massive box of chocolates from Matt & Trish, winning a hamper from the new Deli at Harvest and everyone being nice to us really makes a difference, thank you for your support, it means a huge amount.