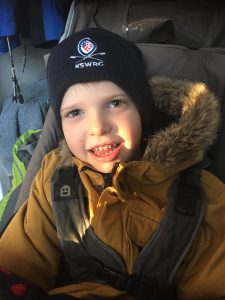 I don’t know about you but January felt like the longest month ever and as ever, ups and downs for Tobes.

You may have read that just before Christmas Toby was having a lot of seizures so we had to postpone our Christmas plans, the same happened on New Years eve so instead of us all spending family time with our friends I went alone leaving Kim at home with Toby. It was the right decision as he had a seizure not long after I left but it’s so rubbish that we have to cancel plans so frequently. Even things like Pilates which we both do on a weekly basis to try and keep our backs strong are frequently cancelled as we’re just too tired to go. We’re very lucky however that our friends and family support is in our decisions and are forever flexible with plans.

Kim has born the brunt of Toby’s seizures this month which takes its toll.

She took him into school for a physio appointment to get his new ‘magic’ suit fitted, which helps to support his core and overall stability, and was invited to join Toby for his swimming session in the school pool. Being in water is literally Toby’s favourite thing in the world so it was lovely for Kim to share the experience with him. It was great fun and Toby loved it until the seizure struck after 9 minutes, meaning to prevent him from drowning Kim needed to quickly get him out of the pool to a waiting member of the class who had the oxygen ready and manage his seizure. It feels so incredibly unfair that he can’t enjoy the thing he loves the most, and neither can we. 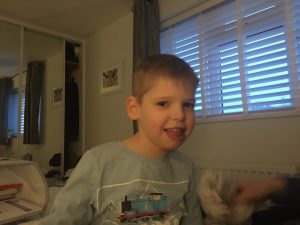 Last week I was away for work and Kim was woken not long after 4am to the sound of a seizure which lasted over 20 minutes. These longer seizures are really difficult to manage as you’re planning rescue meds and constantly thinking about when you’re going to call an ambulance. For every minute that goes by you are thinking “he will come out of it soon” but then every minute is a delay for when the green team would be able to get to us which is a further delay into hospital. The guilt and turmoil of making the right decision is so difficult particularly at 4 in the morning.

It’s a really, really difficult call and one that’s hard to make on your own, we always do this kind of stuff together, Kim was brilliant and dealt with everything in her own calm and collected manner, didn’t call the ambulance and managed to keep Tobes at home, she even put him on the bus for school at 0830 in the morning and headed back to bed for some much needed rest. 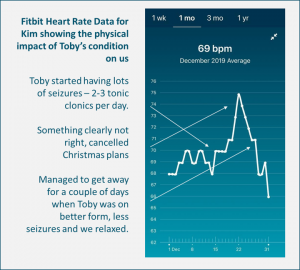 You can imagine the impact this has on our physical and mental wellbeing, something that’s illustrated so well by just looking at Kim’s FitBit heart rate data. When things are going well with Toby, all is level and constant, when it’s not, there’s a huge spike in heart rate with the adrenaline and cortisol surging through our bodies.

Coupled with this is that Toby has now dropped his mid-day nap, it’s good as it means he’s sleeping better at night but it means we don’t get that break in the middle of the day that we’ve been so used to, whether it’s cracking on with some work or having a short nap to recharge batteries that opportunity for an hour of peace is no longer there.

It was good for Toby to get back to school as he was getting bored at home, his favourite ‘toy’ there is his walking frame which allows him to scoot around school wherever he wants, first stop is always Soft Play but when told ‘no’ he just turns and heads straight for the pool, he knows what he wants that boy!

At the end of the month we had a lovely visit from Natasha & Katie. Natasha owns the gym in Olney and has supported Toby in the past by raising funds for us to purchase his seizure monitor. Now, Katie who uses the gym is training for a ‘White Collar Boxing match’ which will see her step into the ring for the first time for her first boxing match!

Katie has very generously chosen Toby’s Trust as her good cause of choice which we’re blown away by. It was so lovely spending a couple of hours chatting and finding out about it more, I’m pleased it’s not me doing it, she’s made of far sterner stuff than me!

I am pleased to say that after a very difficult week at the end of January, it ended on an up with Toby recovering from his 20 minutes seizure and being bring and sparkly. It always feels us with such joy when the fog of the seizures lift and his cheeky personality is revealed.

We’ve got stuff to look forward to in February so here’s hoping Toby has a good spell and we get to see friends and family.