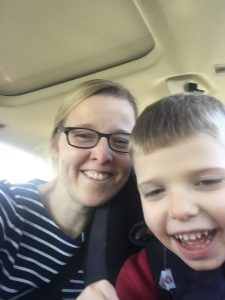 March has been weird for all of us hasn’t it?

For us the month ended in the worst way as we’ve all been pretty poorly which resulted in Toby having the worst day of seizures he’s had for years.

Like everyone in mid-March we were keeping an eye on the developing pandemic and beginning to be sensible about cutting out meetings, reducing time in the office etc until the second weekend when we had a much-needed respite weekend booked in Helen House.

We spoke to the team at HH a couple of times to understand their stance and based on their reassurances we decided to go ahead, to be honest we were exhausted and needed a break. They were closing on the Sunday indefinitely for respite stays so it was going to our last chance for a break.

We picked Toby up from school on the Friday and headed over to Oxford. Checking in was very different to normal with temperature checks at the door, handwashing station in reception, no hugs. Corona was all of a sudden very real. 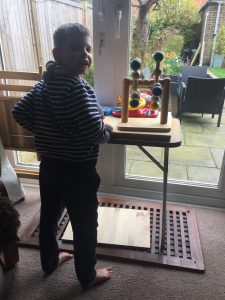 We checked in and spent a long time talking to the two doctors who we know well, at a safe distance, who told us of the precautions in place in house and what was being done in hospitals, it was a little scary to be honest

We left Toby and drove off to a cottage we’d booked, fortunately quite rural and remote and with no one around. We had a long walk in the countryside hardly seeing a soul and two nights without a monitor before heading back to Oxford to collect Toby on the Sunday.

All the time we were away the news had been getting progressively worse and we felt lockdown was coming.

We arranged for Toby and all his gear to be ‘delivered’ to us at the door of the hospice to minimise risk, bundled him into the car and got ourselves home.

Once home we took the difficult decision to cancel our 8 hours a week of respite and told our parents that we needed them to stay away and isolate too. With no school we knew this was going to be difficult for us, Toby and his grandparents who would miss him but the right thing to do. 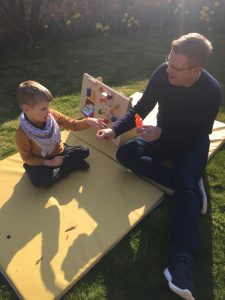 Only on Tuesday did I pop out for some food, other than that we’ve been in isolation, adjusting to a new world, trying to do two hours of work while the other looks after Toby and then swapping over.

Toby’s concentration span is very short, measured in seconds, he bounces from once thing to the next in less than a minute and rarely settles anywhere, he’s always looking for a way to fall, bang his head or have a seizure so being with him is physically demanding and yet mentally stifling. He still plays with the same baby toys he’s had for six years.

What makes this easier normally is the wonderful group of people that support with his care. He desperately misses his grandparents, he stands at his wardrobe hitting his school uniform and is missing his weekly trips to Costa with his carers and nurses.

We survived the first week of isolation ok trying our best to be active and get him involved in activities around the house but then early last week Kim became unwell overnight with a fever and woke with a temperature, headache and cough.

Not only did she feel really poorly but Toby was clearly coming down with it too. 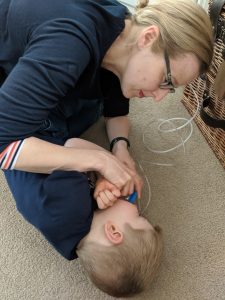 The seizures started around 10am and just got worse and worse as the day went on.

For me the hardest was while giving him his tea, very securely strapped into his chair with a 5 point harness and a table fixed in front of him he went into a fully convulsive seizure and started choking on the food in his mouth.

For a moment I froze, watching him go blue

There’s so much to do and only seconds to do it.

Clear his airway, try and get him out of the chair, get some oxygen, start timing, make sure he’s breathing, it all happens in a blur and leaves you exhausted as once the adrenaline wears off you crash down. Until the next seizure, and the next, and the next.

I can’t begin to describe the physical impact on the body of reacting to all these life-threatening seizures. 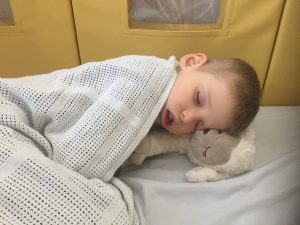 We’d normally be calling an ambulance and heading to hospital after 3 seizures but were advised by our doctors to stay home. Toby had 3 fully tonic clonic seizures by lunchtime, It was terrifying.

We did what we do, planned for the worst while hoping for the best.

The hospital bag was ready at the door but we knew we had to do everything we could to keep him safe at home. The wonderful team at Helen House hospice supported us over the phone, advising us to significantly increase one of his drugs which would help to control the seizures. It’s a powerful drug that sadly makes him likely a zombie, but thankfully it worked.

I slept on Toby’s floor that night so I could deal with seizures and Kim could get some much-needed rest. 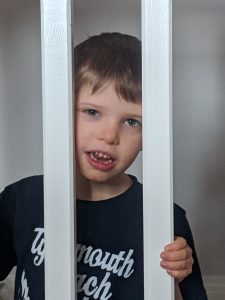 Wednesday was a blur, Tobes had hundreds of small seizures so that he looked like he was shaking but no fully convulsive seizures and was very weak, floppy and not in a good way. And then overnight I came down with it too leaving Kim to deal with Toby while still feeling poorly herself.

Our biggest fear was Toby having a prolonged seizure which would require intubation and a ventilator, which we know are in short supply. It was very stressful for us and our poor families who couldn’t even see us to help, even though they desperately wanted to.

As the month ended thankfully we are recovering but it feels like it’s going to take some time to get our strength back. We’re trying to slowly wean Toby of the high dose of drugs but need to get the timing right, to ensure he’s well enough to cope. 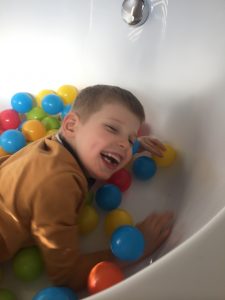 Apart from walking the dog, ideally at times of the day when less people are out, or the odd excursion onto the field behind our house to give Toby some fresh air we are not leaving home and doing everything we can to stay the prescribed 2m away.

We are incredibly lucky to live in a wonderful community surrounded by family and friends eager to help. Thanks to their care and generosity we have not needed to venture out for food or Toby’s medication. Thank you to my parents, Granny Gill, Charlotte, Fliss and Naomi for all your help.

It’s important to keep your spirits up during these difficult times and we’ve been so fortunate to receive amazing gifts from Matt, Trish, Charlotte and Becca. We’re so grateful, they gave us such a boost when we needed it.

If we have had Covid-19 then we’re the lucky ones who got a mild dose and Toby showed once again what a tough little soldier he is.

Sending love to you all.