October has been a tough month for all of us and we’re struggling to stay positive, we’re tired and running on empty even though compared to this time last year Toby’s seizures could be said to be better but the reality is, it’s just different. 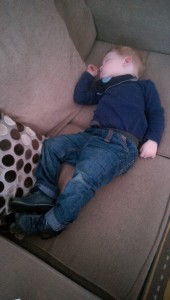 Last year we were heading into a massive hour long seizure each week which was horrific for all of us to deal, from the stress of maintaining his breathing while we waited for an ambulance through to the terror of being in the Resuscitation Room in A&E watching the team work on our little boy it was all hard.

Whilst we’re not going through seizures like that at the moment Toby is suffering 5-6 full tonic clonic seizures every week at the moment, they are mercifully short so we don’t need to medicate him or call an ambulance but they have a massive impact on him, he’s wiped out for hours and even days afterwards.

He also stops breathing, a lot.

Toby is currently in a cycle where around 4-5pm he starts having a significant amount of complex partial seizures and myoclonic jerks. He twitches and shakes uncontrollably but he’s still conscious, it’s horrible to watch and we feel so helpless. We could give him rescue medication but it’s happening so often that we’d end up giving it loads and it would have a detrimental impact on him. Some people have asked what these partial seizures look like, if you’re feeling brave there’s a short video here.

Seeing Toby like this and building for a fully convulsive seizure is draining, we’re always on edge as to when he will go into the full seizure, can we get to him quickly to give the rescue breaths, how close is he to an oxygen tank. We go through that plan every minute, just watching him twitch and jerk and our hearts break. 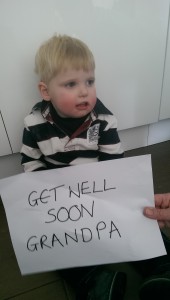 And sadly life has to go on, washing needs doing, food needs cooking and bills need paying. It’s been a stressful few weeks compounded by my Dad having a heart attack.

He was ‘fortunate’ in that he called an ambulance quickly who took him to a specialist cardiac unit where they put stents into his arteries and fixed his blood pressure, it happened on a Thursday and he was home and having lunch with us on Sunday. The power of the NHS is amazing but it all happened so fast none of us really processed it properly and of course it has changed all of us, we’re more aware of how much help we get from our parents and how hard it is on them as well.

As a result of the heart attack and Toby’s current situation we didn’t go to Lola’s second birthday and christening party with all the rest of the NCT group, obviously it was a shame to miss the jelly and ice cream (me, not Toby) but that’s life, cancelling things at last minute as Toby’s not great, we’re exhausted or just can’t cope with going out.

We really wanted to go to this party though as Becky & John had been incredibly thoughtful and generous and asked for donations to Toby’s Trust rather than presents, it’s so touching when people do such selfless acts. 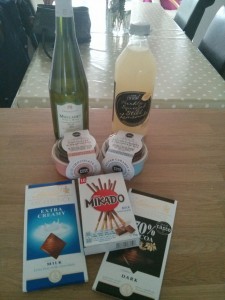 You know when you’re feeling a bit crap and need a boost, that came in the form of Georgia Brock (she of the shaved head fame) standing at the door with a bag of chocolate, treats and a bottle of wine. The whole family was outside in the car and I was almost in tears going out to say thank you. I can’t begin to explain how emotionally draining living with Dravet is, to have love poured back into us is incredibly uplifting and heart warming.

The whole town of Olney has been amazing to us, they’ve shaved their heads, ran (and running) marathons, fun runs and triathlons, organised and run auction nights, cooked (and eaten!) fabulous tapas and of course donated to Toby’s Trust which is incredible and we feel humbled to know you. You know who you are.

They also do the little things that bring a smile to our faces and a tear to our eyes, they pop round with dinner, offer to cook for us or pop round with ’emergency supplies’.

We are surrounded by amazingly generous people who make life so much better, thank you all.

We’ve been brave over the last month and gone with ‘Carer Claire’ to Jo Jingles, once with me and once with Nanna so that she can feel like a proper granny and do nice things with Toby.

It’s gone ok, he has kind of enjoyed it and not had a seizure in the session which is a bonus, sadly it does take it out of him and has contributed to seizures later in the day but we’re trying to persevere for Toby’s sake.

It is hard though for us being around other kids, particularly those his age and younger as it really shows his developmental delays in his mobility, speech and co-ordination. It’s a real reminder that whilst he looks happy and healthy he has, and will always have severe delays.

Sadly though, despite all the appointments there’s not a lot of changes we can make to help Toby through this pattern of seizures, we’ve just got to hope he comes out of it soon and the next pattern is easier on him and for us to watch and deal with. 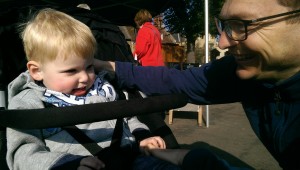 It’s a milestone we have wondered whether we would see, Toby’s second birthday!

Sadly no party for the little man as it’s just too much and too overwhelming so just close family for lunch. No cake (even though Mummy is making a Bob The Builder cake – shsh, don’t tell Toby) as he’s on the keto diet and not really eating at all at the moment.

Life can be a little bleak at times but it really is people like you who read these updates, comment on our Facebook posts and do nice little things that make life bearable. Thank you, we couldn’t do this without you.